The past few weeks have been very encouraging from a regional perspective, given the positive noises emanating from the National Planning Framework/Ireland 2040 plan and the official launch of Crystal Valley Tech which took place on Monday. Speaking at the launch on Monday morning, WIT President and Crystal Valley Tech Board member Professor Willie Donnelly said the innovation represented “a clear state of global ambition” for ICT development across the South East.
With IDA Chief Executive Martin Shanahan and Enterprise Ireland’s Niall O’Donnellan attending the launch, in addition to Ministers of State John Halligan and Michael Darcy, it’s clear that Crystal Valley Tech has captured the imagination of regional and national stakeholders. 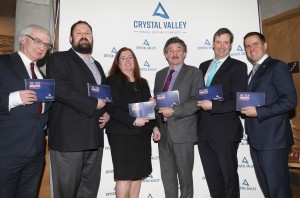 And with this event taking place 24 hours after the Sunday Independent ran an extensive piece on the €300-million-plus North Quays project, it’s welcome to see the region making some welcome headlines at national level. Crystal Valley Tech aims to attract further ICT companies into both Waterford and the South East and with 300 additional jobs set to come on stream within the sector in the coming months, it’s clear that welcome progress is already being made on that front.
Each of the region’s five counties were referenced on Monday’s launch, during which stakeholders stressed that “wearing the county jersey” is not the driving force behind this tech venture. Regional collaboration is now very much the name of the game.
The North Quays project is now beginning to take shape. One expects retail, offices and financial services to be located within the Fawaz Alhokair Group’s development, in addition to private and social housing. Education will be also be key in developing the Crystal Valley Tech concept and having WIT involved at board level through Willie Donnelly and Ciaran Cullen is welcome in terms of boosting subject options and course development. Waterford has suffered from negative press in the past, be it through industrial issues and factory closures, so it’s good to see the tide turning somewhat in that respect. Of course, the Technological University could be another game changer, but as we report on the facing page, concerns remain over what guise such a TU will take on.
Among the other regional challenges will be to get people back into well paid jobs, in addition to attracting indigenous talent back into the region.
We noted at presentations in Brussels last year, that there tech/ICT regions are developing in Germany, Austria and France with similar branding, such as Silicon Alps in Austria. All are seeking mobile capital and citing quality of life as an attraction in comparison to busier, big city living. With 15,000 people now working in IDA-supported employment in the region, and with a 9.6% increase in such employment numbers, it’s clear that the South East is moving in the right direction. With that in mind, we wish those driving the Crystal Valley Tech concept every success with their initiative.