A fundraising campaign is underway to ensure 99-year-old Jim McManus can travel to Buenos Aires, Argentina to dance the tango for his 100th birthday.
STILL an enthusiastic dancer at 99 years of age, Jim McManus is a wonderful example of how leading an active lifestyle can bring about many benefits.Jim, who celebrated his 99th birthday on January 5th, has lived an active and well-travelled life.He is a regular on dance floors across Waterford and the South-East thanks to his love of ballroom and tango dancing – and would certainly give the line-up on RTÉ’s ‘Dancing with the Stars’ or BBC’s ‘Strictly Come Dancing’ a run for their money! 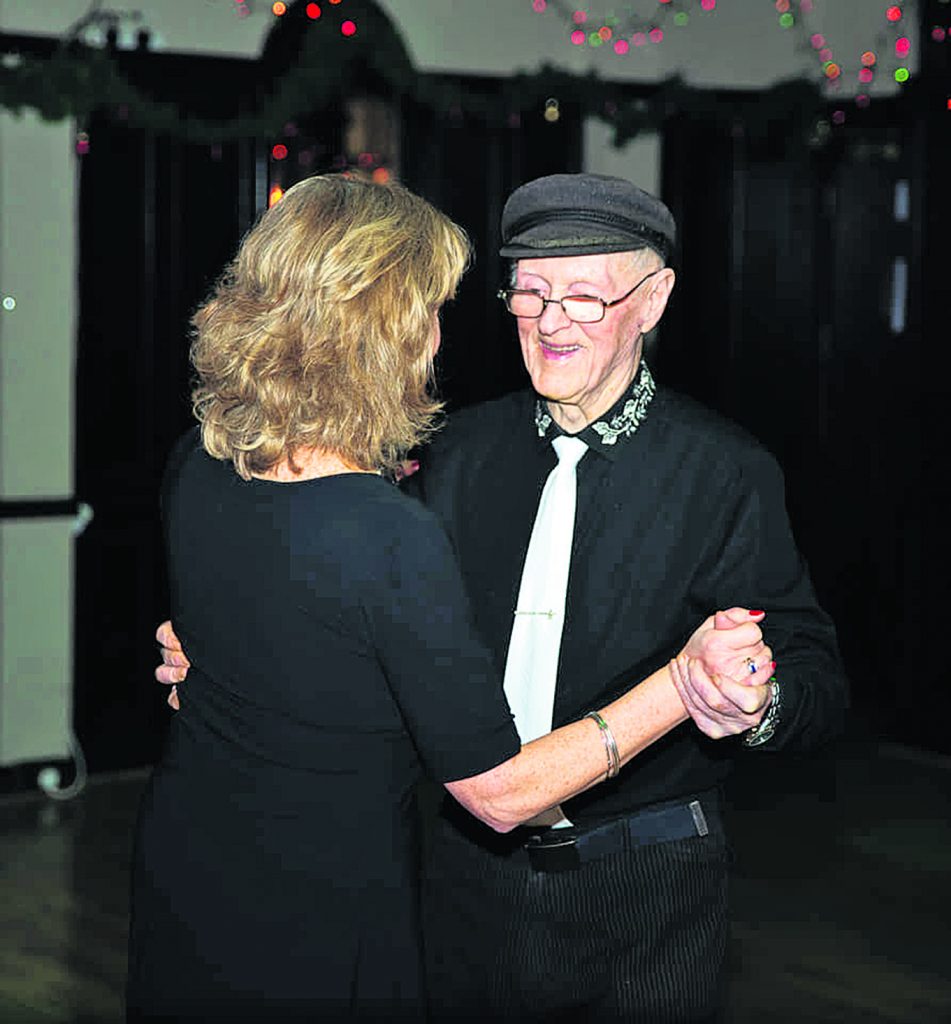 “You’re more connected to your partner than with any other type of dance,” says 99 year old Jim about tango.

Born in Scotland, he served in the British Army for seven years from the ages of 19 to 26.He then joined the Merchant Navy for six and a half years.He and his wife lived in various areas of the UK, including Wales where their children were born.Later on, Jim spent four years working in electronics with the American University in Beirut.“I had been a radio officer in the Merchant Navy so I had learned quite a lot about radio, radar and electronics in general,” he explained.
His father’s family hailed from Enniskillen in County Fermanagh so Jim was familiar with Ireland.
In fact, he regularly travelled over on the ferry and enjoyed trips throughout the entire country.He eventually decided to move to Waterford and arrived here in January 1994.Living in Slieverue, he still leads an incredibly active lifestyle which sees him participating in ballroom and tango dancing on numerous occasions each week.
He dances for an average of around two and a half hours at a time but proudly proclaims that he can keep going for up to four hours!
“You’ve got to be quite fit to keep at it!” he said.During a typical week, Jim enjoys ballroom dancing at the Rhu Glenn in Slieverue, the Brandon House Hotel in New Ross, the Talbot Hotel in Wexford as well as the gatherings organised by ‘Waterford Tango’ at Treacy’s Hotel in Waterford.Although he had been participating in ballroom dancing long before moving to Ireland, he only took up tango after seeing a performance at Garter Lane in 2002.“I always loved tango music but this show really got me hooked on it,” he said.
“With tango, you feel more attached. You’re more connected to your partner than with any other type of dance. You’re thinking about your partner all the time and concentrating on what they will do next. You have to listen carefully to the music and the man has to lead the way but he also has to know what the lady will do next so that he can guide her into that position.” 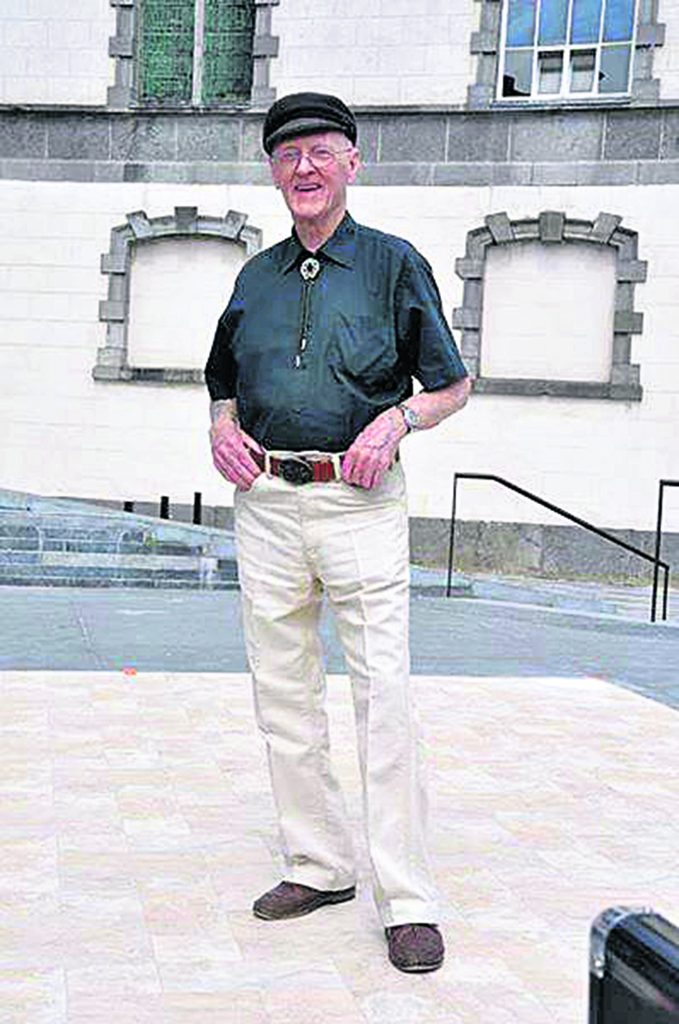 Jim attributes his longevity to a good diet and leading an active lifestyle.

Jim is an active member of ‘Waterford Tango’ which promotes Argentine Tango in Waterford and the South-East.In his quest to promote the dance, he has often participated in tango demonstrations.
The inclusive nature of tango is something which certainly appears to be part of its enormous appeal.
Members of ‘Waterford Tango’ are from various backgrounds and all age groups are well represented.
“The music and movements of tango appeal to people,” explained Jim.
He says tango is not just a dance but “a way of life” and adds that he particularly enjoys the great camaraderie amongst participants. As well as enjoying the dancing, Jim thoroughly enjoys the social aspect associated with being involved with the group.“The people are very friendly and outgoing and we’re all good friends. Everyone’s always happy and we all have a laugh,” he said.Assistant teacher with ‘Waterford Tango’ Tara Bohan praised Jim and his positive attitude.
She described him as an “ambassador” for tango, adding that he is “pivotal” to tango in Ireland.
“Jim is very special. Everyone knows him,” she said.“He is an inspiration to our community and others around the country. His outlook is positive, his mind is fresh, he has a cracking sense of humour and he is an advocate for healthy eating, exercise and dancing. Jim keeps surprising people. He danced from 7pm-11pm the other night and it was tough going!”‘Waterford Tango’ dancers have participated in different public performances, including outside the Bishop’s Palace and at the Tramore Promenade Festival
Dancers from ‘Waterford Tango’ also regularly travel to events throughout the country.
Jim would love to see more men getting involved with ‘Waterford Tango’ and with dancing in general.
“We always have more women than men – that’s a problem with both tango and ballroom dancing,” he commented.“Men should wake up! Women are more enthusiastic. They will come in and dance with each other if they don’t have a male partner. When I was dancing in England, women were scarce and there were always too many men. I think the Irish men are more interested in sport.”Tara is also disappointed at the reluctance of some men to get involved.
“It’s a shame because it’s a great way to meet people and become part of the community,” she said.
However, both Tara and Jim hope that the ongoing popularity of television programmes such as ‘Strictly Come Dancing’ and ‘Dancing with the Stars’ will continue to boost interest in all forms of dancing.
Jim attributes his longevity to leading such an active lifestyle.“It’s a big help if you keep active. I’ve always been active. Couch potatoes are going to have a short life,” he said.“Dancing gives you a purpose in life. It’s an enjoyable way of getting exercise. You’re keeping yourself fit and active. A lot of men think that when they retire from work they have to go home, read the paper and watch television. That’s a downward slide into oblivion. You’ve got to get out, socialise and enjoy life.”