In recent years there has been much discussion about women in politics and business and about the prejudices they still face in some quarters.One woman who overcame a lot of hurdles to achieve considerable success against the odds 60 years ago was Sarah Hughes, a Texan lawyer who despite appearing in one of the most famous and dramatic photographs of the 20th Century was, until recently, all but forgotten. 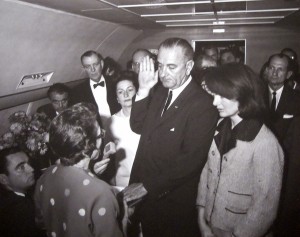 Lyndon B Johnson is sworn in as President of the United States by Federal Judge Sarah Hughes aboard Air Force One. Johnson is flanked by Jacqueline Kennedy (right) and his wife, Lady Bird Johnson (left). Judge Hughes can be seen in the lower-left corner with her back to the camera.

Federal Judge Sarah Hughes was the person who swore in Lyndon B Johnson as US President aboard Air Force One just 98 minutes after President John F Kennedy was assassinated in Dallas on November 22nd, 1963. In fact, it was the first time in history that a woman had sworn in a President of the US.
In 1935, Ms Hughes became the first female State District Judge and, in 1961, she was appointed a Federal Judge. Attorney General Robert Kennedy refused to approve her appointment as a Federal Judge saying she was ‘too old’ at 65.

However, he was forced to change his mind when Texas Congressman Sam Rayburn, who was also the Speaker of the House, held up an important Bill that Kennedy was trying to push through the House. “That bill of yours will pass when Sarah Hughes gets appointed,” he is reported as telling the Attorney General. Sarah Hughes died in Dallas on April 23rd, 1985 at the age of 88.