Two Years in our Pockets! 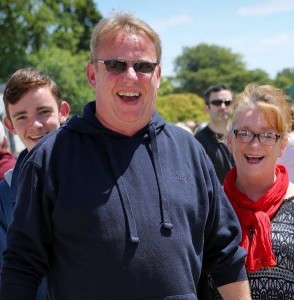 John Wooden is a man whose wisdom I regularly defer to and reference in these pages. He was a record-breaking basketball coach with UCLA and his words are a testament to positive living as much as they were mind bullets for any of his players’ on-court acumen.
On the topic of optimism, Coach Wooden said: “I am an optimist. I believe this results from the fact that I set realistic goals – ones that are difficult to achieve, but within reach. You might say I’m a realistic optimist…
“If you set goals that are so idealistic there’s no possibility of reaching them, you will eventually become discouraged and quit. They become counter-productive. Be a realistic optimist.”
Paul Dower, founder of ‘Waterford In Your Pocket’ is clearly cut from John Wooden’s cloth. Two years after he launched an online initiative championing the sights of our city and county, thousands have warmed to his upbeat, heartening message.
And to achieve this via social media which, for some dullards at least, is all about cribbing, moaning and, sadly, textually abusing, is something worth applauding, saluting and supporting, which this title has done since day one of ‘WIYP’. Paul’s a glass half full kinda guy, and we can never have enough of them in these parts!
“We’ve almost 11,500 likes on Facebook, almost 1,400 following us on Twitter and over 5,000 on Instagram and I can only put that down to people looking for something that’s light, something that’s a bit of fun,” said Paul over a cuppa on Thursday last.
“I’m a big newspaper reader, read both paid-for titles every week, including yourselves and I know that both have a job to do, and it’s a job done very well, but Waterford In Your Pocket is that bit more light-hearted in an overall sense and I think it’s a niche we’ve filled pretty well over the past two years.
“Now the fact that I love taking photos is an added bonus too – I’m very much a snapper as opposed to a photographer, and it’s been great to get so much feedback from people wondering where my wife Jean and I have been in Waterford on any given day.
“And while Fáilte Ireland, Discover Ireland and Discover Waterford have a job to do, they’re Government agencies and they have to be business-orientated; we need those bed nights and we need to see the tourism money coming into this country, I can approach it from the perspective of, hey lads, we’re the ones lucky enough to be living here.
“We’re the ones who can wander around Waterford at our relative leisure, pop in somewhere, have a cup of coffee and a bite and find a bit of value in so doing, and when you do venture along our highways and boreens the way Jean and I do regularly, you do discover great value and great company for good measure! And through Waterford In Your Pocket, I’d like to think I’ve been able to shine a light on what we have in the city and county from that angle too”
And the past two years have also yielded great discoveries for Paul, whose sons Aaron and Craig have also weighed in behind his online venture.
“I’ve seen so many places that I never even knew existed,” he replied. “I reckon I’ve seen more of Europe than I have of my own county but I’ve been trying to put that right of late! Places like Tallow and Ballmacarbry; we’ve always know they’re there, but we’d not been until Jean got behind the wheel – I don’t drive myself – and off we went. And it’s been a real eye opener.
“Stopping in, getting a coffee, chatting to locals and having a walk around, getting a feel for the place, then taking a few snaps and sharing that experience online, I absolutely love it. Be it the scenery: the mountains, the coves, the valleys, the change in accents – how everyone’s ‘boy’ at this end of Waterford and ‘lad’ in the west, it’s been a real eye opener and a great learning experience. It’s just been great fun.”
From a city perspective, I’ve always stressed the importance of venturing beyond the Butlerstown Roundabout, and as Paul added, the same logic applies for Dungarvanites, who could just as easily be drawn towards Cork city as opposed to Urbs Intatca Manet.
“We’re not that far apart, Waterford and Dungarvan, and if you travel along the Coast Road in either direction, my goodness you’re in for a treat! To me, it’s all local, and we’ve heard a great deal in recent years about keeping things local and supporting what we have locally. Well, just look what we have on our doorstep: we are blessed in Waterford when it comes to variety, scenery and good old fashioned craic and good company, be it winter or summer.
“And to realise that there are a lot of people both in Waterford and further afield who see what I see, who recognise that this is a great city and a beautiful county with so much to offer, and who visit Waterford In Your Pocket in such huge numbers on a daily basis, offering really positive feedback, is tremendously encouraging.”
Paul knows he’s not going to turn Waterford into a tourism nirvana all on his own, hence my labelling him a realistic optimist, but he’s flying the flag in a thoroughly uplifting and wholly admirable manner.
An initial idea floated by Cian Foley, Waterford In Your Pocket merits our ongoing support, just like any initiative which illustrates the splendour of our small, spectacular county. Keep it lit, Paul!