Great to see new brand developments for Waterford Tourism. In the late nineties there were some good tourism initiatives by Redmond O Donoghue, with the Waterford tourism brand.Now we have another one with the visitwaterford website.David McCoy of the House of Waterford Crystal did a good job on the launch at Tramore Racecourse last week.Failte Ireland are also behind the new proposal with their link to the Ancient East category and will be a type of sub brand to this one.As the Mayor of Waterford, Cllr. John Pratt said at the launch, we are lucky that the county of Waterford is a destination that is rich in assets. We have a historic city, picturesque towns and villages, beautiful mountains, tranquil country side, stunning coastline, world class attractions and a wide range of festivals and activities. 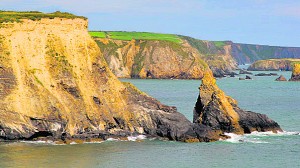 As they said on the introduction with the Ancient East brand, Waterford is where modern Ireland begins with it being the oldest city in Ireland.The Viking Triangle is a great launch pad for it.The unique combination of Waterford with 1000 years of history in 1000 steps he said plus the Greenway gives much for visitors.
The plan said Failte Ireland with Sarah Fitzpatrick is to have people stay for two days and nights and move some of the tourism overnights away from Dublin.Another major angle to the whole idea is to create a great food destination in Waterford.Kinsale is best known as a foodie place, but now Waterford is catching up.
More and more food offerings with locally made products.The plan is to make Waterford more of a must see destination. More tourism experiences will be developed like the Viking one and others. Over 300,000 was spent on them during the year with Lismore also getting some money too
Already 3 per cent of all international tourists that come Ireland go to the county of Waterford and a much larger percentage from the domestic market. We get 1 per cent of the international spend out of the 9.6 million that enter Ireland for business or pleasure.Domestic number are 509,500 visitors to the county and they provide the majority of tourism revenue, thus there is a need to diversify.The aim is to fill the vacant periods from October to March and make hotels busy all year round.Room prices would be cheaper in those months also.New itineraries would be built for visitors and packaged tours. Tourism numbers fell this year overall with Brexit but could grow next year if Failte Ireland forecast is correct.
The Mount Congreve investment of 3 million plus excited the attendance as well as the strong backing form Failte Ireland.The need to network and support each other’s business and recommend good pubs and restaurants, like they do in Kerry as one wag said there. They are doing it well for years.A brilliant video was also shown at the launch at Tramore Racecourse featuring many popular things to do in city and county.