Waterford wood carver John Hayes is continuing to attract significant international attention. He recently returned from the Chetwynd International Chainsaw Carving Championships in Canada and will attend many more international events this year. (header across right page)
JOHN Hayes has enjoyed remarkable success since his ‘Angel of Fenor’ masterpiece, located in Fenor graveyard, started to grab headlines some years ago.
From a mention of his early work in the Fenor notes of The Munster Express, John has gone on to create countless other projects including the record breaking 23 metre long Viking sword, the ‘Dragon Slayer’, which was officially unveiled at its home in the heart of the Viking Triangle last December.
The project, which was completed at the National Ploughing Championships in Screggan, County Offaly, saw a storm-felled tree from Ballinamona Woods in Waterford being transformed into the world’s longest wood sculpture. 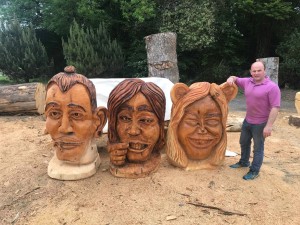 John Hayes alongside his ‘Inside A Teenager’s Head’ project which he is working on in association with Ballybeg Youth Resources Centre and Waterford Walls.

The hugely impressive creation was then transported to its new home in Waterford’s Viking Triangle. John created a Bayeux tapestry-like narrative story in wood, telling the fascinating story of the coming of the Vikings to Ireland and their eventual assimilation. The sword has proved to be a hugely popular addition to the Viking Triangle and has attracted significant interest among both locals and visitors alike. As detailed elsewhere in this week’s paper, John is now setting his sights on his largest and most ambitious project to date – a 120-200ft wooden sculpture entitled ‘The Guardian of the Déise’ which will be installed at a prominent city location. He believes the project has the potential to “transform” Waterford and has likened it to the ‘Angel of the North’ in Gateshead, England as well as other landmarks such as ‘The Kelpies’ in Falkirk, Scotland.
He hopes his creation can do for Waterford what the likes of the ‘Eiffel Tower’ has done for Paris and what the ‘Statue of Liberty’ has done for New York. “This will make a statement that we’re the oldest city in Ireland and will invite tourists to come and start their journey here,” he said. “You can show people photos of every major city in the world, but show them an iconic image and they will instantly know which city it is. This will do that for Waterford.”He is keen to create an “experience” and says ‘The Guardian of the Déise’ will provide Waterford with a “kiss the Blarney Stone moment”.
While exact details are still being finalised, visitors will be able enter the sculpture and climb through the Guardian’s body where they will be rewarded with a spectacular view across Waterford City and the surrounding areas. The Guardian’s outstretched arm will be holding a giant sword and the overall scale of the project is sure to make a huge impression regardless of whichever location is eventually chosen for its home. As with many of John’s other projects, such as the ‘Dragon Slayer’ sword, he is keen to tell a story through creating a tapestry.
As a proud Déise man, he has an infectious enthusiasm for all things Waterford related. This was particularly evident when the ‘Dragon Slayer’ sword was unveiled in Waterford shortly before last Christmas. 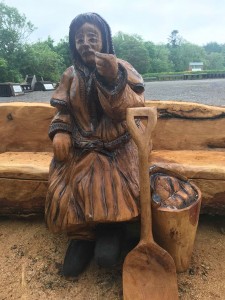 ‘The Lady By The River’ which will be located in Windgap, County Kilkenny.

“I’ve been genuinely taken aback by people’s reactions. You get so caught up in the small details that you forget about the overall impact which the sword makes,” he said.
“Breaking a record was great but being able to do something for Waterford is a big thing for me. I’m proud of where I come from, but we have to be confident in what we do and believe in ourselves.”
He is the first to acknowledge that a change of mind-set is required locally so that Waterford can reach its full potential.
“In Waterford, we still think that we have to just sit at the table,” he said.He hopes his ‘Guardian of the Déise’ creation will send a signal that Waterford can compete on an international level.
‘The Guardian of the Déise’ project is the latest addition to an already hectic schedule which John is relishing.He has just returned from the Chetwynd International Chainsaw Carving Championships in Canada. Along with his trusted sidekick James ‘Joxer’ Doyle, he undertook an arduous 28 hour trek to Chetwynd which consisted of travelling to Toronto, onto Vancouver, then onto Fort St John before eventually reaching Chetwyn.John finished mid-table at the event and says he is thrilled to now be competing alongside stars he had previously only watched online such as Canadian TV personality Ryan Cook.“They’re telling me that they love what I’m doing and that it’s great to have someone new on the circuit,” said John.