MATT KEANE MEETS
PART TWO
Last week we read about the incredible work Terence O’Neill commits to on a daily basis as manager of the Men’s Hostel in Bath Street in Waterford city. 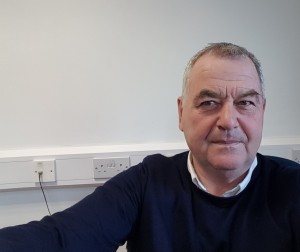 Terence O’Neill, whose work at the Lady Lane Hostel is “full on but enjoyable”.

Terence relayed some harrowing stories but he also spoke glowingly about the success that has been achieved at the hostel, as well as the runaway fairytale story that has been the High Hopes Choir.
“I was born in the early 50s in the ‘top of the town’ as they call it here in Waterford and from an early age I loved playing football – and by the age of 12 I had played for four different clubs which must be some sort of record!
“One of those was a team called Chelsea FC which was run by the late Tommy Walker who used to work on O’Connell Street selling diesel and petrol. That club then became Maryville and then I moved on to Southend United.
“I played in goal in the Under 12 final in Ozier Park – we lost 1-0 to Bohemians and I can still remember crying after that defeat. Micky Aldridge stuck the ball in the net but unfortunately he was playing centre-half for us so we lost.
“But my first club was the Villa and of course so many of us owe so much to the late Frank O’Byrne because he got hundreds of kids playing the game at such an early age and you can see the success story that club has become especially during the last 10 to 12 years. He was an incredible man.
“I did play a bit of hurling at one stage and took part in the Street League; there was a man called Jimmy Moloney who ran that competition and my first ever trophy was a little blue statue of Our Lady and my mother was so proud when I brought it back home. I suppose I was handy enough as a goalkeeper in soccer although I didn’t think so but Ritchie Elliott brought me up to Kilcohan Park when he was coaching the Waterford FC reserve team.
“There was no Kennedy Cup team in those days so the underage players would represent Waterford against visiting teams and one day we defeated Bury 3-1 in Kilcohan in front of a crowd of 12,000 because the Waterford first team were playing Limerick in a vital league match after our game and that was a fantastic day.
“Before that I had captained O’Connell Celtic at Under-15 level and we won the only trophy the club ever won at schoolboy level and that’s a lovely memory to have.”
So why did Terence play in goal from day one? “My mother had an accident working in the Jute Factory and she got some money following that accident and bought a television.”
He continued: “I think our family and the Flynn family from the top of the town were the only people to own a TV set and I can remember going up on the roof and moving the aerial around so it would be facing towards the Tramore area and we would get a reasonable picture on the screen.
I used to ask all the lads on the road to come in and watch the FA Cup Final and we had some wonderful days watching football on it. 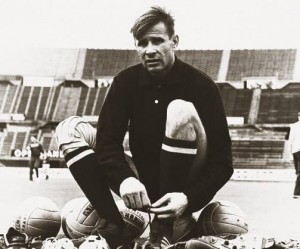 The great Lev Yashin, whose acrobatics persuaded a young Terence to become a goalkeeper.

“In 1963, England played the Rest of the World in a famous game at Wembley and the great Russian Lev Yashin was in goal and from that day on I always wanted to be like Yashin.
What a goalkeeper he was,”
He also has fond memories of the famous players who played for Waterford FC during the glory years of 1966 to 1973.
“Players like Johnny Matthews, Peter Bryan, Peter Thomas and Jimmy McGeough used to live in Marian Park which was just a stone’s throw from my house and Paddy Coad was the manager and he used to ask me to play in goal against them which was unreal for me.
“They used to train on the football pitch in Marian Park under rather poor lights and Noel Griffin used to give me his jumper because it used to be freezing cold. Richie Power, Christy Wallace, Buddy Purcell and Terry Stafford were the local lads and playing with all of those players was just incredible.
“Later on I played hockey and cricket and I took up running and I used to run with some of the best athletes in the world including Gerry Deegan and John Treacy. Those two guys were amazing.”
Terence took a redundancy package from Waterford Crystal many yeas ago having been employed as the manager of the blowing room and he has good memories of his time in ‘The Glass’
“Waterford Glass was admired and loved all over the world and it saddens me to see what is left of it now as I drive out the Cork Road. I know there is something in the region of 100 or so people employed down on The Mall now and there are some other people making glass on their own but there will never be another factory like ‘The Glass’. It was an amazing place.” Terence is married to Ann and he went on to speak about his wife and family. “Ann is a wonderful support to me because sometimes she says you are spending more time in the hostel than you do at home but she knows it consumes my life and she fully understands that. We are very lucky to have two daughters who have done very well for themselves. The two of them are employed at corporate level with international companies, they’re both directors of their companies, they travel the world and I’m very proud of them.
“Our son Barry holds a unique record in sport because he won the National Pitch and Putt title three years in a row. The last All-Ireland he won was in Louth and he had to come from six shots behind on the back nine to beat a chap from Cork – that really was something.
“He went on to play golf on the tour in America but you need a hell of a lot of money to compete over there and he did find it tough and he made a few mistakes… but he’s very happy now in the USA and he is selling cable television – and though he’s settled there, he will always miss Waterford. But he’ll be home in a few months’ time and we’ll play a few rounds of golf and that’ll be great.”
Returning to the Men’s Hostel, Terence is looking forward to the future. “” have been so lucky during my life because I have worked with some amazing people,” he stated.
“We left the old hostel in Lady Lane about four years ago because it was a very old building and it was over 300 years old. When I heard the news that we would be moving I travelled all over Ireland to see what the new hostels had to offer and we put our heads together and came up with a plan of what we wanted to do.
“The main thing was to give the men a room of their own room. The old one in Lady Lane was a communal premises so you cold have anything between 40 or 50 men in together which wasn’t ideal to say the least…so we wanted to change that, give them something to be proud of and then to bring in the wrap around services through education and so on.
“The High Hopes Choir for example would have come from the changes we made at the hostel. We help them with their addictions and you can tell how more happy they are since the move four years ago. It’s a full on job but I love it.”