Waterford made it two wins from two following the latest round in Division 1A of the Allianz National Hurling League.This comfortable win sees last season’s league finalists in top position and well placed for another deep league run.The trip to TEG Cusack Park in Mullingar brought the expected result even if the performance lacked the intensity of opening day victory against Cork the precious Sunday.

Three opening half goals, including two in first half injury time effectively had the two points wrapped up for Liam Cahill’s men before the interval.Billy Nolan, Kieran Power, Mark O’Brien and Darragh Lyons all came into the starting line-up with Jake Dillon a late replacement for the injured Kieran Bennett. 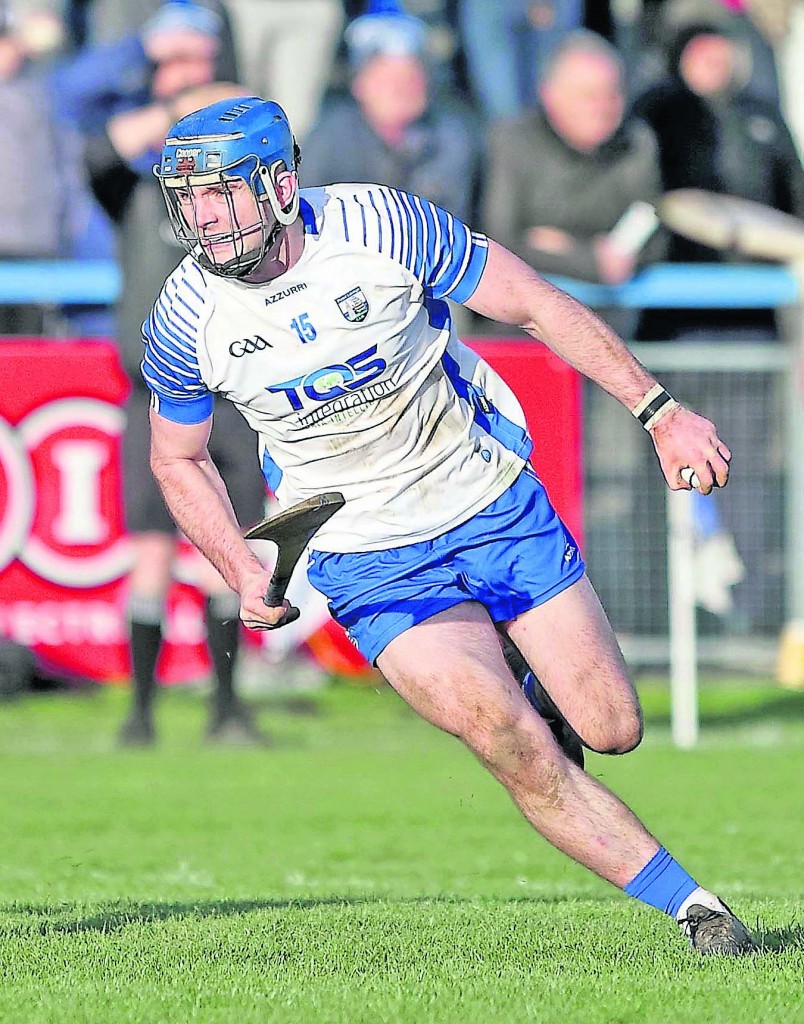 Patrick Curran in action for Waterford

Westmeath won the toss but surprisingly opted to play against the breeze in the first 35 minutes. The impressive Iarlaith Daly and Dessie Hutchinson landed early points with Stephen Bennett testing the ability of the home goalkeeper Aaron McHugh with a ninth minute drive which was deflected out for a 65. The Ballysaggart man nailed the placed ball for a 0-3 nil lead.

The Waterford defence was in complete control with Jake Dillon and Darragh Lyons both also showing up well in the early exchanges. Westmeath lacked nothing in effort and while they proved obstinate in the opening half but their inability to translate possession into scores proved their undoing.

At the end of the opening quarter Waterford led 0-7 to 0-2 and was soon to earn a further scoring boost. A long delivery from Iarlaith Daly found Patrick Curran who immediately shipped the ball onto the unmarked Stephen Bennett who shot low to the net from 10m, 1-7 to 0-2 after 17 minutes.

The unfortunate Mark O’Brien, who was busy in the early action, limped out of the game to be replaced by Ballyduff Upper’s Mikey Kearney.Westmeath landed four of the next five points to narrow the margin to just five points and it looked like the home side was going to have a fighting chance with the wind advantage to come over the second 35 minutes. Goalkeeper Billy Nolan, peerless under the high-ball all afternoon, then staged a one two with corner back Shane Fives from a puck-out before landing a monster point from just outside his own 20m line.

Bennett converted another 65 but it was in first half injury time that the visitors sealed the game. Goal number two arrived a minute into injury time when a sortie by Dessie Hutchinson wasn’t properly dealt with by the Westmeath defence with the ball squirming into the path of Jack Fagan who couldn’t miss form close in. Moments later Stephen Bennett gathered the ball 30m from goal, passed his marker before bouncing the sliotár off the synthetic goalmouth past the cúlbaire for Waterford’s third major and a 3-10 to 0-6 interval lead.

Trailing by thirteen points there was no way back for the Westmeath men. Niall Mitchell did convert five frees for the Sean O’Brien’s charges and also managed to hit the net for Westmeath’s only goal after 53 minutes. The scoreboard now read 3-14 to 1-9 and while the home side needed goals they failed to threaten Billy Nolan again.

Substitutes Ciarán Doyle with four points and Allan Devine with a pair of white flaggers helped the Westmeath beat the bookies pre-game handicap and to keep the margin within single figures.The margin could and should have been even more handsome for Waterford with Stephen Bennett first hitting the post and then having a penalty saved on 65 minutes after Jack Fagan was fouled. Bennett finally looked to have earned his hat-trick when he finished to the net in the 70th minute but alas the 2019 Waterford hurler of the year was adjudged to be standing in the small square before the ball arrived.

Captain Pauric Mahony and stalwart Kevin Moran both made their seasonal return before the final whistle with another two league points making the long journey home all the more enjoyable.Waterford will play Limerick in round 3 on Saturday February 15th.