Blues Bounce Back to Winning Form

Waterford FC 2 Bray Wanderers 0
Blues manager Alan Reynolds made no less than six changes for this game at the RSC on Friday last from the team which bowed out meekly from the FAI Cup against UCD.
In came Rory Feely, Noe Baba, Cory Galvin, Noel Hunt, Sander Puri and Stanley Aborah. Out went Izzy Akinade, Dean O’Halloran, Gavan Holohan, David Webster, Dessie Hutchinson and the suspended Bastien Hery. It was a brave move by the Waterford manager but thankfully everything worked out fine. Cory Galvin, who was making his third debut for the club, was superb in the middle of the park. Sander Puri, who was back after his international duty with Estonia, was excellent and Noel Hunt, who returned following his groin injury sealed the game with a well taken goal. The three points keeps the club very much in the hunt for European football next season. Waterford dominated the early stages and had a penalty appeal turned down on 12 minutes when Sander Puri went down in the area, but referee Neil Doyle waved play on.The Blues created a half chance on 24 minutes when Stanley Aborah slipped the ball into the feet of Cory Galvin who found Sander Puri with a neat pass, but the shot from the Estonian International blazed wide of the target from 18 yards.Dylan Barnett linked up with Paul Keegan five minutes later and the skipper played the ball to Cory Galvin, but his low shot was straight at keeper Evan Moran. 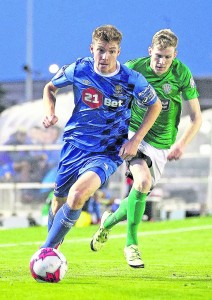 Noe Baba did well on the half hour mark to cross for Sander Puri, but he just failed to connect with a bicycle kick effort.Bray Wanderers keeper Evan Moran was brought off injured on 37 minutes after he was involved in a clash with Sander Puri.His replacement Mark O’Connor’s first task was to take the ball out of the net as the Blues struck the front.
Cory Galvin split the defence of his former club and released Sander Puri who finished past O’Connor from 12 yards.Kenny Browne rose highest inside the penalty area to get on the end of a Stanley Aborah free kick on 43 minutes but his header was straight into the hands of the Bray keeper. 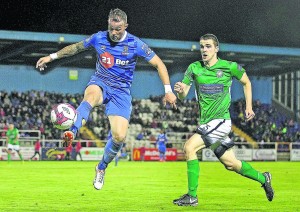 The Blues started the second half on the front foot and Stanley Aborah fired a free kick over the bar on 47 minutes.Sander Puri did well down the left-wing soon afterwards to cross to the near post for Cory Galvin, but he couldn’t direct his effort on target.Noel Hunt doubled the Waterford lead on 72 minutes when Rory Feely whipped in a right-wing cross that wasn’t dealt with by the Bray defence and Hunt controlled the ball superbly and hammered a right-footed shot past keeper Mark O’Connor from deep inside the penalty area. Ger Pender took advantage of a rare mistake in the Blues defence two minutes later, but his low left-footed shot was saved by Niall Corbet.Gavan Holohan should have added his name to the scoresheet on 85 minutes, but he headed a Stanley Aborah free kick over the bar.