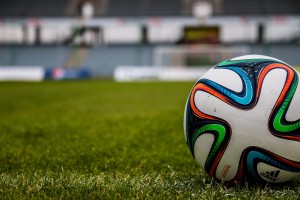 Waterford recorded their third consecutive single goal victory on Friday night at the RSC and for the second week running, Derek Daly netted the all-important goal.
The Blues went into this game a point clear of UCD. The students crashed at home to Cobh Ramblers on Friday night and as a result Ramblers have moved into second place, two points behind Waterford and the two teams play each other on Saturday night in St Coleman’s Park in what will be a nerve-wrangling contest.
Derek Daly is quickly becoming a hero with the supporters and many are calling him ‘Deadly Daly’. The winger-midfielder gave his opinion after he had scored the golden goal on Friday last.
“It was a hard-fought win. We got the goal early but more importantly I thought we played some really good football throughout the game. We had some chances to go two or three up maybe so if we had taken them, we could have relaxed a bit.
“It’s a crucial win for us and we’re delighted with it. It’s been a tough week in training with all the injuries that we’ve suffered in recent weeks so we’re really worked hard as a group of players to get the three points tonight so it’s all worthwhile.
“I think that maybe we need to be a bit more clinical in the final third but we’ve been defensively solid that the one goal gets us through game. We’re so defensively well set up that it makes it tough on other teams. We need to keep going with that and hopefully we can.
John Martin, the Under-19 player made his debut for the Blues in the game and it was a stunning first game for the midfielder who was, needless to say, overjoyed when he spoke after the match.
“I was delighted tonight to get the debut. ‘Rennie’ told me to just try to get on the ball, to keep calm and to win my tackles so hopefully I did that.
“The guys that were playing around me were a massive help because they kept me settled and I thought I did well enough so I’m pleased with the performance but more so the result.
“It was a brilliant win for us. Even though we were on top for most the second half, Longford kept on pushing us for the equalising goal but we were great defensively tonight so it’s fantastic to get another three points.
“We need to grind out the win maybe but we just need to keep pushing on. I’m delighted to get the start tonight so hopefully I’ll be able to get the start next week against Cobh. I just want to keep impressing in training and doing well. It’s great to be part of it and it’s great that we’re winning
“It was a great atmosphere out there tonight as well. The crowd were fantastic and they really motivated us tonight. From start to finish now, they push you on to get that extra tackle in, to work hard and it’s brilliant. It really is. It’s a proud moment to make my debut and I’m delighted.”