WATERFORD Metropolitan Council has been called on to honour a soccer legend by naming a stand at the Regional Sports Centre (RSC) after him.
Paddy Coad triumphed as a player and manager, bringing the first ever league titles to Waterford while at the helm of Waterford FC in the 1960s.
But he was just as successful elsewhere too, becoming one of Shamrock Rovers’ finest players with 104 goals in 274 appearances.
The team became known as the Coad Colts during his time there and claimed several League of Ireland titles and FAI Cups. 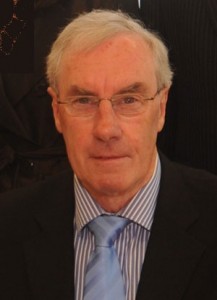 Cllr Davy Daniels has called for a stand at the RSC to be named in honour of Paddy Coad.

In one of his many career highlights, he played against Manchester United in the European Cup in 1957.
“He was an icon when it came to football in Waterford, he was supposed to be the greatest soccer player in the country who never went to England,” said Cllr Davy Daniels (Ind) who brought the idea to the Metro Council.

A tribute already in existence to Paddy Coad can be found on Doyle Street, where he lived.
Born in 1920, he got his start at Corinthians before playing for the Blues, Rovers, Glenavon in the north (the outbreak of World War II cut short his time there) and was capped 11 times for Ireland.
“We’ve had great sports men and women in the various sports codes over the years,” said Cllr Daniels who pointed out that Waterford has produced, in particular, many soccer players.
“And yet there are two lovely stands in the RSC that are without a name,” he said. 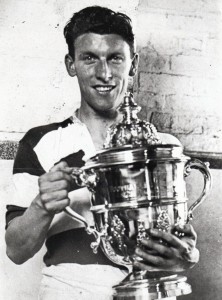 He told the members that he didn’t want a decision immediately, and that he would like to see what the Council’s processes for such a request would be.
Management agreed to look into the Paddy Coad suggestion.
“Some of the members mightn’t remember him but I think it’d be worth it if we could honour an icon of a man like that, particularly this year with Waterford moving up into the premiership,” said Cllr Daniels.