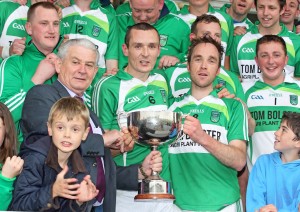 Sean Cheasty etched his name into the pages of Fenor History on Saturday afternoon last at Walsh Park as his point, with the penultimate puck of the game sealed for the club a first ever County Junior Hurling Championship at the 11th attempt.
Thirteen is often believed to be an unlucky number yet for Fenor the only goal of the game in the 13th minute and it proved to be the decisive score of the game.
It was at that time that they won a sideline cut on the stand side of the field playing into the Keane’s Road end of the ground with a strong wind at their backs.
Top scorer Ben Gallagher came across to take, producing a magnificent effort which sailed deep into the St Mary’s parallelogram.
And a momentary lack of concentration by the Touraneena men was to cost them as the Fenor man’s effort glided all the way into the St Mary’s net to give them a 1-2 to 0-2 lead.
It was St Mary’s that had opened brightest as points from brothers Mike and Eoin Kearns gave them an early 0-2 to 0-0 lead by the sixth minute, but points from Conor Rockett and Ben Gallagher before the latter’s goal quickly followed.
Eoin Kearns and Ben Gallagher, from placed balls, shared four points equally to keep Fenor three in front with as many minutes of the first half still to play.
St Mary’s, however, gave themselves a good chance going into the second half thanks to Eoin Kearns and Jason Sheehan popping over points.
But just before the short whistle, Ben Gallagher brought his afternoon’s tally to 1-4 to give his side a 1-5 to 0-6 lead as the sides headed for the dressing rooms.
The second half followed a familiar pattern to the first. St Mary’s were quickest out of the traps and hit points from Eoin Kearns and Kevin Sheehan to draw level by the 33rd minute.
Ciaran Kirwan and Conor Rockett followed up with points for Fenor to put them in front by two once more but Saint Mary’s were back level by the time the game entered its final quarter as Eoin Kearns and Kevin Sheehan found the range.
Ciaran Kirwan was, by then, beginning to make an big impression and he hit two more points in a five minute spell with Tadhg Campbell hitting one for Fenor and Eoin Kearns pulling one back for the Western Champions to leave Fenor two in front.
St Mary’s then enjoyed a mini purple patch as Eoin Kearns, Aidan Fitzpatrick and Kevin Sheehan found the range to give their side a one point advantage with two minutes still to play.
But Fenor were to finish strongly and Ben Gallagher from a free and Sean Cheasty with the penultimate strike of the game landed the scores to snatch for Fenor a first Junior title for the club. No doubt, a long night was had in the village that evening. It may still be going on!
Fenor: Kieran Dunphy; Fergal Whelan, Donal Kelly, Luke Middleton; Peter Kelly, Jim Halley, John Flynn; Anthony Kiely, Niall Hennessy; William Cullinane, Ciaran Kirwan, Ben Gallagher; Tadhg Campbell, Conor Rockett, Mickey Nicholls.
Scorers: Ben Gallagher (1-5; 1-0SL, 0-5f), Ciaran Kirwan (0-3), Conor Rockett (0-2), Tadhg Campbell and Sean Cheasty (0-1 each).
Substitutes: Sean Cheasty for William Cullinane (HT) and Anthony Whelan for Peter Kelly (42 mins).
St Mary’s: J.P. Fitzpatrick; Tom Tobin, Sean Fitzpatrick, Jack Power; Dermot Tobin, Denis Coffey, John Ahearne; Kevin Sheehan, Owen Barron; David Whelan, JJ Coffey, Mike Kearns; Jason Sheehan, Eoin Kearns, Kieran Barron.
Scorers: Eoin Kearns (0-8f), Kevin Sheehan (0-3), Mike Kearns, Jason Sheehan and Aidan Fitzpatrick (0-1 each).
Subs: Ronan Gleeson for David Whelan (46 mins) and Aidan Fitzpatrick for Kieran Barron (48).
Referee: Colin Cunningham (Tallow)