Waterford Junior League; Premier Division
Bohemians 1 Ferrybank 5
Ferrybank kept their title hopes alive when they came from behind to defeat Bohemians in Ben Wadding Park on Friday night last. Both teams went into the game on the back of contrasting results the previous week. Bohemians had beaten the Villa at the same venue while Ferrybank had lost at home to Southend United.
That defeat put a serious dent in their hopes of winning the league and this was a contest they simply had to win to remain the in the hunt.
They fell behind early on but when they got back on level terms they took over completely and duly went on to take home the three points on offer. Bohemians remain on a total of ten points and in a battle to get away from the relegation zone. The host got off to an excellent start when Shane Nolan hammered a Ger Whitty to the net. 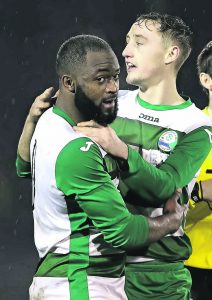 Ferrybank’s Meschac Babatu is congratulated by team mate Eoin Rhodes after he scored his second goal of the game.

Ferrybank almost equalised on 21 minutes but Paul Phelan headed a cross from Meshac Babatu wide at the back post. The visitors did however get back on level terms seven minutes later. Paul Phelan sent over a corner-kick to Adrian Rockett who headed powerfully past Adam Carroll from six yards. Eoghan McGrath-Butler almost regained the lead for Bohs on 41 minutes with a fierce shot from 25 yards but Kevin Burns did remarkably well to tip the ball over his crossbar.
Up at the other end Ferrybank went in front for the first time on 43 minutes. Ben Duffy sent over a peach of a cross and Meshac Babatu ghosted in between two defenders to touch the ball to the net from close range.
The home side were given a mountain to climb when Ferrybank doubled their advantage after 51 minutes.
Ethan Phelan went off on a blistering run down the left flank and picked out Meschac Babatu who netted his second goal of the match with a delightful finish from 12 yards. 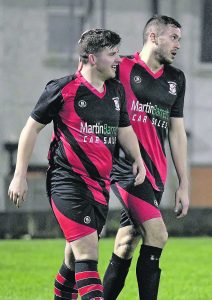 Whatever chance the home side had of getting something from the match disappeared completely when Ferrybank made it 4-1 on 62 minutes. A wonderful combination of play between Meshac Babatu and Sean Duffy resulted in the ball being played out to Ethan Phelan and he drilled the ball past the helpless Adam Carroll from an acute angle.All of the Ferrybank goals were top class and their fifth strike was perhaps the best of them all.
Davy Walshe, who was only on the pitch for eight minutes, took control of the ball 30 yards from goal and after looking up he unleashed an unstoppable cracker which rattled the Bohemians net.
It was a super goal and it capped off an excellent performance by the visitors and now they can still dream about being crowned champions. David Whittle’s charges on the other hand will continue to scrap for points to secure their top flight status for next season.