Dermot Keyes reports
It’s a great time to be Waterford captain, I put it to Kevin Moran ahead of Sunday’s League Final against Clare.
After all, the games are coming thick and fast, there’s a trophy on the sideboard from 12 months ago and the next run out represents an opportunity to keep that pot here on Suirside. And who knows, maybe a few more trophies may come the county’s way soon enough. 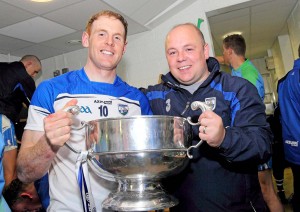