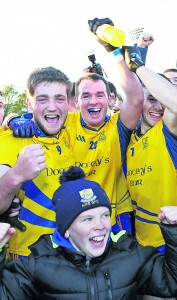 That winning feeling: The Niremen are intent on making football history when they take on Dr Crokes in Mallow in this Sunday’s Munster Senior Club Final. | Photo: Sean Byrne

The Nire aim to go where no Waterford football club has ever gone before when taking on Kerry’s Dr Crokes in next Sunday’s Munster Senior Final at Mallow (throw-in: 3.30pm).
In a rematch of the 2006 decider, in which the Waterford champions came within a whisker of history, Benji Whelan’s side is aiming for a third time lucky success in a provincial showpiece, having also missed out against Austin Stacks two winters ago.
Victory on Sunday next, something which cannot be discounted in the wake of their stunning semi-final turnaround against Carbery Rangers in Clonakilty, would represent the biggest Deise football success since the 1957 Munster Championship win over a Kerry side which featured a debutant named Mick O’Dwyer.
And it would certainly constitute the most outstanding result in this code since the Waterford Under-21 team, spearheaded by current Nire skipper Shane Walsh, downed a Kerry side including Colm Cooper, in a memorable 2003 Munster Final.
“Of course we have a chance,” said an upbeat Benji Whelan, whose managerial CV grows all the more impressive in a code which continues to battle for credibility in a county where hurling occupies the dominant GAA position.
“There’s a different level of excitement within the panel, and management, than what there was two years ago, at least as far as I’m concerned. We’ve a job to do on Sunday in Mallow, and it’s a job we’re focused on: and that’s to bring home the trophy.
“This is a very proud and tight group. We realise we’re flying the flag not only for our club, but for the whole of Waterford, and it would be a huge day for football in our county if we could get the better of such a big club from a county with such a great tradition in the game. It goes without saying that we respect Dr Crokes, who have played in so many Munster Finals over the last 10 years. But this is our second run out in three years in such a match, and we’ve learned a lot together as a group in my time as manager, and I hope we can bring that know-how to bear when it matters most.”
“Ideally, we’d have Maurice O’Gorman ready to go next Sunday, but we’ve had to plan without him,” said The Nire boss when asked about the readiness of his squad.
“He had a plate put into his jaw last week (following an injury sustained in the County Final), which sounds a lot worse than the actual reality of it – it’s a precautionary measure above all else to help re-infuse the bone – but it’s what had to be done in order for him to keep playing senior football, and if all goes to plan in Mallow, we’ll have him back in the Spring.” Meanwhile, Martin Walsh, who was knocked out cold against Ballinacourty in the County Final, is available for Sunday’s decider, following a fortnight’s recuperation, “and it’s great to have him back for so big a game”, said his manager.
“There’s not too many clubs who have everyone available in the last week of November, between wear and tear and lads being away from home for work or college. Ideally, we’d have a few more lads around, the likes of Michael O’Gorman, Diarmuid Wall, Gearoid Hearn and Tommy Cooney, but we’re not looking to make any excuses either.
“The focus of the group, since we sat in the dressing room in Páirc Uí Chaoimh two years ago after losing to Stacks, was to get back to a Munster Final, and to win it. We’ve done that. Now it’s all about taking the next step.”