Peter Moloney from Colligan, Dungarvan was announced as the Supreme Sports Star for 2019 at the 29th annual awards banquet at the Park Hotel, Dungarvan on Sunday week last. Moloney picked up his second monthly award when chosen as the October winner, following his success as part of the four-man Irish team that won the €1.25m Nations Cup World Final in Barcelona.
Along with Cian O’Connor, Paul O’Shea and Darragh Kenny, Moloney, who played a key role on the team, qualified for next year’s Tokyo Olympics, ensuring that for the first time in history, Ireland will be represented at the Olympic Games by three equestrian teams; eventing, dressage and show jumping. It was also the first since 2004 in Athens that the Irish show jumping team qualified for the Olympics. 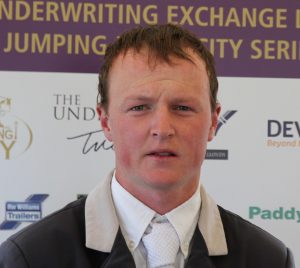 Peter Moloney was overall winner at the Awards

Davy Russell, winner of back-to-back-Aintree Grand Nationals on Tiger Roll and Cheltenham Gold Cup winning jockey Davy Russell was the special guest.
Interviewed by Kieran O’Connor, Russell recalled his emotions during last April’s Aintree national and told the attendance that he was neither too nervous nor feeling too much pressure. Russell grew up surrounded by hurling and horses while his father was also a cross-country athlete.
A clearly delighted Peter Moloney expressed his thanks to the Park Hotel as he accepted the 2019 award from Pierce Flynn. “I won my first monthly award when I was sixteen, and it has taken me until now to gain my second, which shows the depth of talent in the county. However, the wait has been worthwhile, and I am delighted to take away The Park Hotel trophy as Supreme Sportsperson in the county this year.”
The four riders, Moloney, Kenny, O’Connor and O’Shea who secured Olympic qualification won’t necessarily represent Ireland in Tokyo. The make-up of the team will be decided by Irish manager Rodrigo Pessoa closer to the Games. However, should he be able to replicate his form of 2019 and given that the horses stay fit and well, Moloney has an excellent chance of continuing Waterford representation at the Olympic Games.