WATERFORD County GAA Board has been granted planning permission by Waterford City & County Council for the redevelopment of Walsh Park.
The new home of Waterford GAA will have a capacity of over 18,000, although it may be late 2019 or early 2020 before it opens its doors.
Plans for the development consist of the demolition of existing on-site buildings, with the exception of the Southern Stand, and the construction of a host of new facilities.
The development will consist of a new western boundary wall complete with turnstile housings, ticket office and exit gates; a new western terrace complete with roof cover; new sanitary and concession accommodation at the western end of ground; new northern open seated stand (uncovered); and new part open seated stand at northeast corner (uncovered).
The updates will also include new sanitary accommodation at northeast corner; new 2-storey dressing room/administration building at the eastern end of the ground; new sanitary and concession accommodation at the south-east corner; new southern boundary wall at south-east corner complete with a turnstile housing, ticket office and exit gates.
Controversially, Waterford’s senior hurlers were forced to play their ‘home’ games in this year’s Munster Championship outside of Waterford due to Walsh Park being deemed unsuitable in its current condition.

An image of the proposed new Walsh Park.

When contacted, Waterford GAA County Board did not wish to make a comment on the approval of planning permission.
Jo Cregan of Waterford City South Combined Residents, who was one of the organsiers of the recent public meeting held to discuss the future of Walsh Park, is pleased with progress.
She said a number of very positive meetings involving members of An Garda Síochána, representatives of residents associations and GAA officials have been held since the public meeting.
“Everything has been up for discussion and the GAA are actively engaging with the community,” she said, adding that all meetings have been very amicable and all stakeholders are working in collaboration. 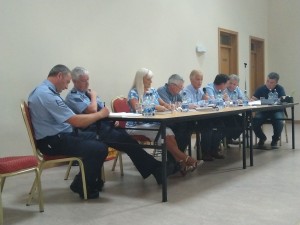 A number of stakeholders including GAA officials, local residents and members of An Garda Síochána addressed the recent public meeting to discuss the future of Walsh Park.

The Munster Express understands a number of submissions in relation to the development were lodged with Waterford City & County Council, however most centred around parking difficulties and were not objecting to the overall development per se.While she said “nobody wants to stand in the way of progress”, Jo Cregan said there have been a number of legitimate health and safety concerns.
The lack of traffic management has proved a major issue, however it’s believed these concerns will be allayed when the eagerly awaited traffic management plans have been developed.
The committee has expressed some disappointment that neither the event management nor the traffic management plans have yet been produced.
However, both are described as being a “work in progress”. Another meeting involving the relevant stakeholders is scheduled to take place in November.