My oh my, doesn’t time just fly? This Sunday sees the return of the National Hurling League as Waterford host neighbours Wexford in Walsh Park at 2pm in Round One of Division 1A.
But where Waterford currently sits in the hurling world is difficult to assess. Last September’s trip to Croke Park places Derek McGrath’s side within touching distance of the Holy Grail and just off the summit behind the all-conquering Tribesmen.

With the change to the Championship structure this year it may well be that certain sides decide to hold their powder dry for when they really need to be firing in May and June. ‘Only the League’ may ring a little more resoundingly this time around.
Twelve months ago, I would argue that Waterford took a somewhat blasé approach to the League Quarter Final, selecting what amounted to reserve side for the trip to Salthill against the hosts. Losing what still proved an entertaining contest left the management team and players an 11-week run into the first round of the Munster championship against Cork. 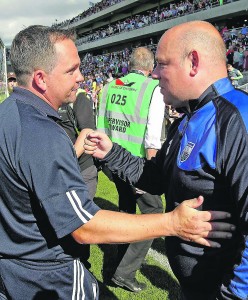 Derek McGrath and Davy Fitzgerald exchange pleasantries following the Deise’s All-Ireland Quarter-Final win over Wexford in Cork last July. See Sport 2 and 3 for more ahead of the teams’ NHL clash at Walsh Park on Sunday next. | Photo: Noel Browne

With April officially earmarked for club games only tn 2018 and the Hurling League scheduled to conclude on Sunday, March 25th; it will be interesting to see if there is a change in attitude towards not only winning the League but the League in general?
With Waterford senior hurlers not entering the Munster Championship until Sunday May 27th and if the Waterford County Board respect the ‘April for Clubs’ diktat, Derek McGrath will have four full weeks to prepare his side for the trip to Ennis. Waterford will then have four Championship games in four weeks to decide their summer fate.

This new Championship structure would appear to favour counties with stronger overall panels. There are likely to be injuries as well as suspensions in this hectic four-week period of action.
Waterford is currently in year five of the Derek McGrath project with the vast majority of the players also on board over this period and the Deisemen have one of the most settled player groups at present with very little change in personnel expected this season.
The beaten All-Ireland finalists has a strong core of 26 or so players and I’d expect a fair amount of squad utilisation in the upcoming League.
While back in training since November the break for the much-deserved trip across the Atlantic may place the Déise at a disadvantage for this Sunday’s opening round and in the last couple of weeks, Waterford have had a couple of good hit-outs against both Dublin and Offaly in challenge games. Both the retuning Tom Devine and Noel Connors are currently carrying knocks but there is better news for All-Star Jamie Barron who has recovered from the injury that kept him out of The Nire’s County Football Final before Christmas and should be available for selection this Sunday.
With a large home crowd expected at Walsh Park, Waterford are likely to select as strong a team as possible. Mainstays like Kevin Moran, Michael Walsh, Tadhg De Búrca, Austin Gleeson and Pauric Mahony are all likely to start.
Austin Gleeson lined out at half-back in the recent game against Dublin and may well not only wear number six this Sunday but actually occupy the number six slot as well. And with Fitzgibbon Cup on this week, it may well be Friday night before the starting line-up is finalised. (See Sport 3 for more).