TAKE IT AS RED 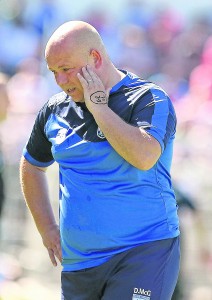 There’s a lot to be said for the therapy provided by the post-match puckaround. And watching one faithful Waterford fan tapping the sliothar over and back across the game’s most splendid playing surface, on Father’s Day, with his young fella, left me envious.
As the sun continued to splash down upon Semple, I’d have done anything to swap positions with that dad, and be down on the paddock, hitting a ball over and back with my own little one, wearing her Waterford jersey, along with a big smile.
And it also made me think of my own late Father, a lifelong hurling lover, and the enormous mutual disappointment we’d surely have shared down a phoneline on Sunday evening were he still among us.
And how I miss those post-match chinwags: those puckarounds of the mind as we went over and back on what he’d seen on television and I’d witnessed in the flesh.
But still I lingered somewhat on that literal post-match puckaround, as crows doodle-bugged to feast upon the detritus left on the banks surrounding Tom Semple’s field, and the headspace it was surely providing for the dad in question, who’d bleed white and blue if one opened a vein of his.
That most fundamental element of the game we love, pucking left, then pucking right, was surely more therapeutic than wading back heavily through a match in which the Deisemen were out-thought, at times outmuscled and, from one end of the game to the other, comprehensively out-hurled.
To see Waterford produce such a flat display, in the context of how well we’d been told training had been going, including the camp at Fota, felt more than a little inexplicable.
And if we expect more from this team, that’s because we ought to. There’s nothing wrong with that.
Derek McGrath has spoken about the need to change a historic mentality that more than a few Waterford fans have grown up with: about seeking reasons, excuses or scapegoats on the days when things don’t go to plan. And let’s face it; we’ve had our share of them since the autumn of 1959.
So whatever cribbing there may be among some about Barry Kelly’s refereeing display, last Sunday’s Munster semi-final was not won nor lost on the whim of the man in black. Derek McGrath didn’t take that line minutes after Sunday’s final whistle, and he was right not to. Waterford lost because they simply weren’t good enough, pure and simple.
What makes that tough to stomach is that we’ve seen what these players have produced in recent years at three different grades, and it’s only right and proper that there was an expectation that Waterford would make a victorious entry into this year’s Hurling Championship.
But the contrast between Sunday’s performance and their previous Thurles run-out could hardly have been starker. In defeat to Kilkenny in last year’s All-Ireland semi-final replay, Waterford emptied the tank in a way they rarely have in defeat previously: to a man, you could have expected no more from any of them as they came out the wrong side of a classic.
Not so last Sunday, a match in which observers could pick through the bones of Waterford’s effort similar to the dive-bombing, belly-loaded crows picking through some patron’s sandwich crusts.
“In big trouble,” I scribbled into my notebook after 43 minutes, and that trouble was not to abate between then and full-time. A match Waterford never gained a decent footing in, a match in which they led for only six first half minutes, may represent a wake-up call ahead of the Qualifiers.
Credit Cork, a county which has clearly returned to hurling’s top table, and welcomingly so but do so knowing that to expect more from this Waterford team is not an unrealistic expectation.
We expect more. Why? Because the players at Derek McGrath’s disposal are capable of so much more than what they served up on a blazing Sunday in North Tipperary. The Back Door awaits.
And, like the boy whose day was still made by that post-match puckaround, along with the chat and the smiles with his ‘auld lad’, we grown-ups still expect the men in white and blue to front up in 2017. And do you know what, there’s time still.