Waterford and Tipp to meet again after match abandoned. 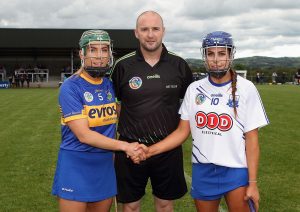 Waterford and Tipperary must do battle again as Saturday’s All Ireland camogie opener was abandoned due to a serious neck injury to Tipp forward Nicole Walsh. It happened in the 57th minute but there was still eleven minutes to play according to the officials. Waterford led by four points at the time (1-15 to 0-14) and looked set for a surprise win.
Rule 41.2 states that “play should be temporarily suspended for a maximum of 15 minutes. If the issue cannot be resolved during this period, then the match should be abandoned.” Walsh was down for half an hour when Cork referee Andrew Larkin called it off after consulting with the Camogie Association. She went to ground after contesting a high ball. The Borrisoleigh player was wrapped in warm blankets as the Tipp and Waterford medical teams attended to her.
Two ambulances arrived on the scene. At seven o’clock, spectators were ordered out of the ground. An air ambulance subsequently landed at the venue.A second half goal from Orla Hickey and eleven Beth Carton points (five from play) had the visitors six to the good after 52 minutes.
The teams were level nine times before Waterford cut loose with a scoring burst of 1-4. Cait Devane converted two frees before the game was brought to a halt. Both teams were back in the dressing rooms when word came through. Patricia Jackman returned for her first championship start in three years at midfield. Waterford shaded a fiercely contested first half 8-7. 0-7 for Beth Carton (four from play) and four from play for Orla O’Dwyer. Two players at the peak of their powers.
The hooking, blocking and tackling from both sides led to a tough and tense encounter. O’Rourke implemented his match-ups from the throw in. Lorraine Bray was tasked with Cait Devane in an unusual centre back role and stuck with her all evening. The All Star forward landed a free for the hosts after just 30 seconds. Ereena Fryday added another. With her first touch, Carton got Waterford off the mark as she beat four Tipp backs.
Another classy Carton effort from 65 metres and Hickey’s first (from a Jackman assist) levelled it at three all. It was Carton versus O’Dwyer for the rest of the half.
The Tipp dual star, who is on her way to the Brisbane Lions, got the better of UL colleague Caoimhe McGrath. At the other end, Annie Fitzgerald was twice denied by Premier keeper Caoimhe Burke. Shona Curran was forced off with a calf injury after 22 minutes. Emma Hannon took her place. Tipp finished the half with three wides in a row. It was tit for tat in the second half. Level five times. Championship debutant Sarah Lacey and captain Niamh Rockett kept Waterford a point up.
O’Dwyer’s fifth and a divine Devane effort over her shoulder snuck Tipp back in front (11-10). Mairead Power replaced Aine Lyng in the Déise defence due to illness. Carton equalised from a free. There were two injury delays, lasting five minutes in total, as Fryday and Jackman suffered bangs.
When play resumed, Tipp retook the lead through Grace O’Brien. Then that blitz from the all-whites. A Hickey point and two from Carton before the Dungarvan forward whipped the ball to the Tipp net on 50 minutes. A Carton free, her eleventh single, sent them six to the good and on course for an almighty shock (1-15 to 0-12). Devane did hit back with a double but it was Waterford’s to lose at that point.It’s Dublin next at Walsh Park on Saturday evening