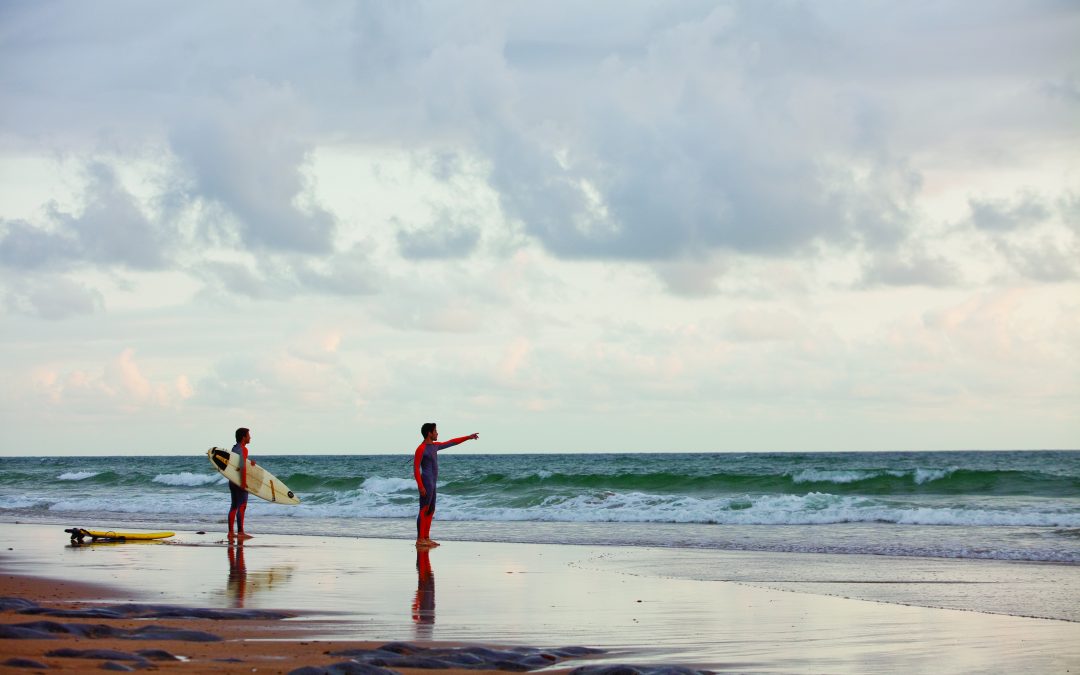 A short trip to Portugal in late March saw us take in the region of Alentejo, a less developed region for tourism compared to the Algarve or Lisbon region.

In a previous article we wrote about the inland region near Evora south east of Lisbon, but further south Alentejo has a very unspoilt coastline that has similarities to Ireland with rocky coastlines, quiet beaches with great surfing too.

It beats Ireland in some respects with nice walkways along the cliffs and some coastal cycle routes.

We were advised that it would be better to be based near the seaside town of Vila Nova de Milifontes about two hours drive south of Lisbon. You can get there via public bus transport from Lisbon with a local bus/taxi but a car rental is best. VNM is near the size of Dungarvan or Tramore. 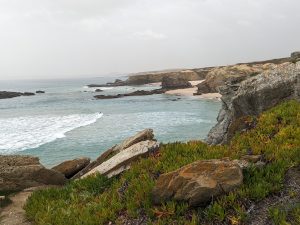 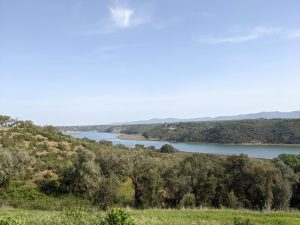 Car hire prices range from €30-50 per day depending on if you take third party insurance or comprehensive insurance and sat nav. The latter is recommended, as road signs are not brilliant in rural areas.

Some Portuguese experts in the tourism sector, namely Antonio, suggested going there and we were not disappointed, having endured some rainy periods in Lisbon and inland. Sunshine greeted us on the coast.

We recommend driving first to Porto Covo and see this fine rocky area at the end of a rocky coastline. Some nearby beaches saw some off-season surfers try their luck on the waves in wet suits.  We took a cliff walk away from the village, which was well maintained and had some places for coffee stops too.

We came from Evora about 90 minutes away but we took small stops in Viana and Alvito along the way, where there are Celtic influences too then along via Ferreira, which has a great Parador castle hotel.  Lots of forests along the way and eucalyptus and cork trees.

Porto Covo is a small village with limited accommodation so our destination was V.N. Milifontes. The downtown area was undergoing road works, so one parks further away from the coast.

We noted many white painted terraced houses, charming shops and cafes, as well as smaller style hotels to stay in. At the beach area you will find some people kayaking, a club were out with just women kayakers. A local operator can rent you one but watch the tides. The bay is an estuary with the river Mira meeting the sea, so it is calmer, and one can get a nice swim in. Locals swim less as sea temperatures are around 14 degrees. Outside the inlet you could see strong surf and currents, but with a car you can also visit nearby beach areas too like Praia das Furnas to the south. The main beach is the Praia da Franquia  and Farol.

We also walked along the Praia de Almograve and the Brejo Largo the next day, which are rather sleepy places off season. Surfers can rent boards for 20 euro for day and a tenner for wet suit.

The scenery is as good as Ballydwan or Bonmahon on the Waterford coast.

V.N.Milifontes is quiet in March, with many restaurants closed for low season in this town of 6,000 people that rises to 50,000 in high season of July and August, we were told.

Most visitors are Portuguese. We heard some English accents in one hotel having lunch at the Beach Club, where rooms were just €60 a night with sea view off season and saw some walkers and cyclists too but overall this is very much the real Portugal and prices are good.  Often people go to guest houses and pay €40-50 a night

We stayed a little outside near Zambujeira in a more rural setting where holiday bungalows are rented for €120 a night or €150 in the season, breakfast included and a packed

lunch for walkers if needed.   For readers this place is called Monte do Zambujeiro and beaches are not far away and also the very scenic Cabo da Zambujeiro.

This is holiday accommodation also and has a small swimming pool outdoors and trails around a small forest leading down to the river Mira with a diving platform for the river also.

For walkers look up the Rotavicentina.com for routes. It’s important to have maps if you go out of internet coverage but WiFi is better than County Waterford generally.

Great place to do reading and relaxation in this rural location, but not far from amenities.

The river area of Mira is also host to wildlife with swifts nesting here, gannets, along the river many trees add to the Atlantic flavour of the place, where the wind blows like home, but is warmer.

Getting to Monte do Zambujeiro is via an unsurfaced road, near the bridge from Milfontes where we needed Google maps to be sure we were correct, having had to do a u- turn in another boreen.

Stress over, we went back to town for food. Great fish here and we were surprised that it was fairly quiet, having been busy day time. Some businesses only open in May, when the season really takes off.

There seemed to be a number of foreign workers here for a break from the city and enjoying the beach.  A shortage of workers is a situation here too for the summer season is expected.

We were recommended to visit Cabo Sardao, another fine rocky headland with a lighthouse. Again, there are cliffside walks, wish we had the same at the Metal Man in Tramore.

On the way, we noted a number of people with back packs making their way along trails, a few cyclists too. It’s a really popular place for sunsets. It was a little like Mayo in Ireland, a number of mature male German motorcyclists hang about too.

Close to Cabo Sardao were some traditional villages, where life seems to stand still like in Ireland, on a Sunday morning. Some surfers were heading to the sea and we noted also a local bus service so not too isolated. Cabbages and corn grew in nearby fields.

It was back to VN Milifontes for some fresh cod, which is great value here on the seashore in a beach side café. Lots of camping opportunities here for the summer. 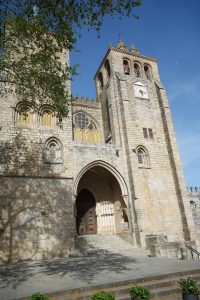 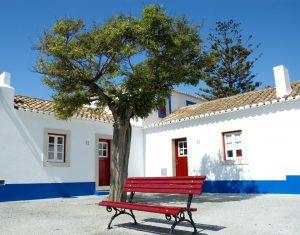 Next destination that day was north of Lisbon to Ericeira via the motorway and the 15km Vasco da Gama bridge over the Tagus River on the edge of capital Lisbon.

Ericeira is another beach resort famous for surfers, where some Irish from Tramore and other areas sometimes go. By road Ericeira is about 30 minutes north of Cascais and not far from medieval town of Sintra.

This is a town where many Lisboans have holiday homes and has a free spirit. There are more foreign tourists here and larger hotels like the Vila Gale group among others.

Ericeira has a nice old town with intriguing cafes and small restaurants. Off season, some places closed. We stayed in Vila Gale, where the €25 evening buffet was great value.

Café Amora is a good place to meet locals or the Pescadores bar. Good seafood here again and on the beach you can see the fishing vessels parking on the sand.

Good cliffside walks but can be windy. Sintra was a great day trip. See the great palace and grounds there. Mafra, closer to Ericeira has another palace but was closed on Tuesdays.

On the way back to Lisbon we had a nice swim and beach walk in Estoril where famous spy Ian Fleming stayed. He wrote the James Bond series and there was one great car chase between Cascais and Ericeira.

We travelled from Dublin with TAP Air Portugal who have better departure times in the afternoon than others so you avoid the early morning rush and no need to be in Dublin the day before.

Car rental was via Europcar, who were very efficient, but there are other options too like Autorent. Sat nav is recommended too if going to rural areas and having the auto toll electronic system installed saves time too, as there are many tolls on motorways, bridges and around the Lisbon area.

The region of Alentejo is an agri and forest area, different and lusher in colour than the Algarve. VM Milifontes is halfway between Algarve and Lisbon. Trains and buses go to Evora and, connections with VM Milifontes. See Rome2rio app for transport options.