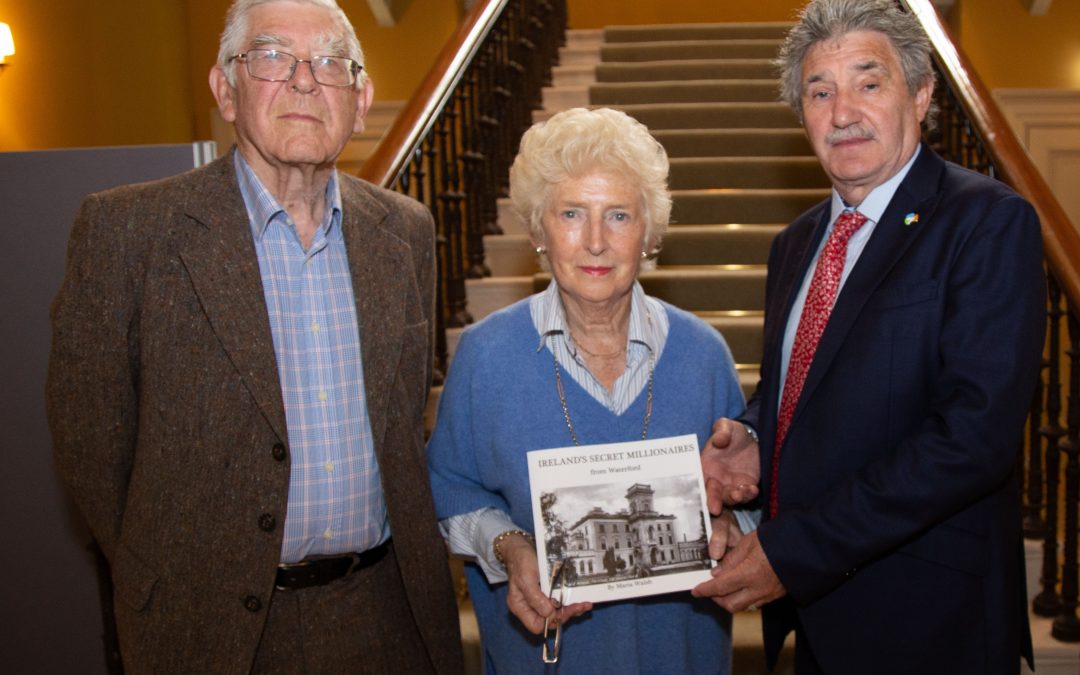 SINCE opening in 2016, the presence of Agora’s European Headquarters at the historic Woodlock House has brought increased activity and vibrancy to Portlaw. The name Agora derives from the Greek word for ‘marketplace’ and, with six companies now operating underneath the Agora umbrella, the company certainly is a market of gigantic proportions. In addition to Agora Publishing Ireland (API), Woodlock House is now also home to International Living (which is the best known and most established member of the Agora family); Agora Publishing Services Ireland (APSI); and three more companies, Agora Integrated Marketing (AIM); Threefold Systems and Emerald Contact Centre are located at their Waterford offices, at Confederation House. 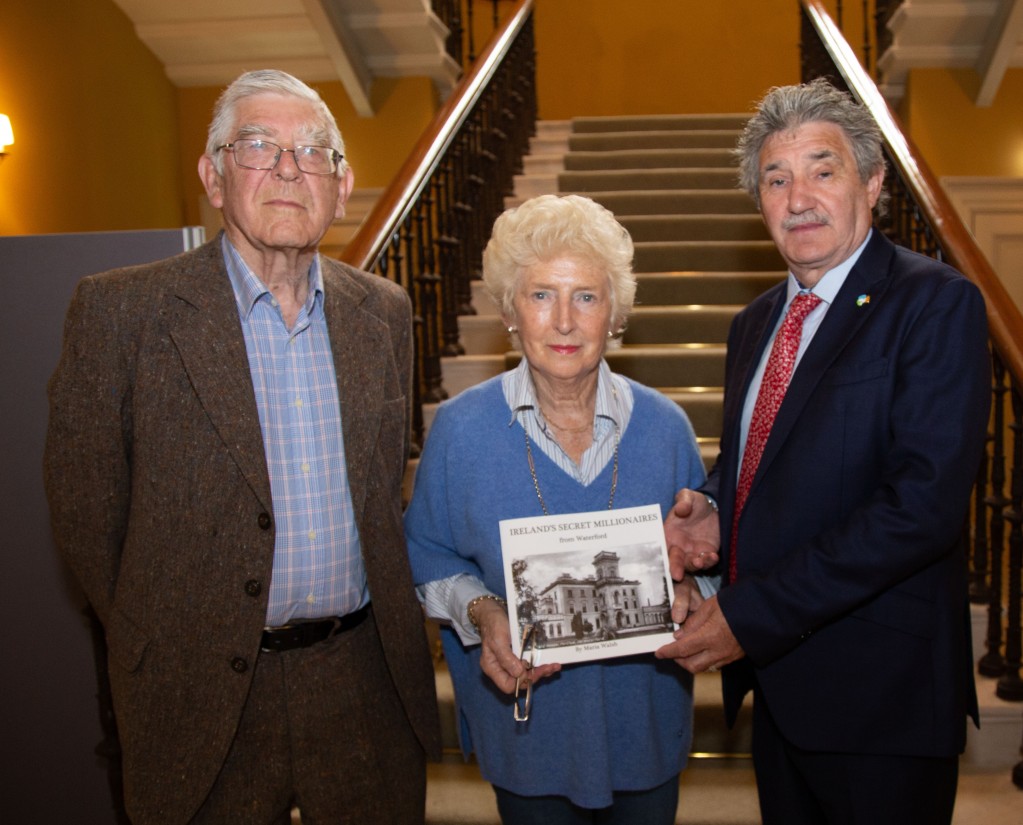 Pictured are Terry Malcomson Crosbie and Carmel O'Regan Crosbie presenting a book to Minister John Halligan which he presented to Bill Bonner, President & Founder of The Agora Companies to mark the recent annoucmenet of 135 new jobs at Agora

Jackie Flynn, Publisher of International Living, has been with Agora since it first established a presence in Waterford back in 1999. “When Agora were looking for a base, the IDA gave a choice of either Donegal town or Waterford city,” she explained.Luckily for Waterford, the latter was chosen – and Agora Publishing Ireland is now celebrating 20 years in the Déise. Jackie explained that a handful of people initially re-located from the US and set up base in Waterford until locals were hired. As one of the first three people hired by the company, she is delighted to have been part of the remarkable Agora success story.
“Agora is a company that allows you to reach your full potential – there are no barriers put in your way,” she said. After establishing a presence in Waterford, Agora quickly grew and expanded.
“Email marketing was the new marketing strategy of the day and we were able to find a talented group of people who were fast adapters and learnt new skills,” Jackie explained.
Previously, International Living had been a monthly publication. However, the advent of email marketing presented many new opportunities. Initially, the circulation of International Living was 24,000. It’s now approximately 110,000. The publication is aimed at the North American market and, more specifically, at a US or Canadian person seeking information about retiring aboard. “While the travel information is of interest to everyone, the actual retirement information is specific to North America and suggests places where people might consider retiring to,” explained Jackie. The company continued to prosper and, about 16 years into its tenure, the idea of developing an ‘international hub’ began to form as increased pressure was being placed on the company’s Baltimore base. As Ireland is located within a different time zone, Agora realised that its Irish operation would have the ability to be online at different times and service different markets without delay.
The idea of developing an international hub continued to take shape and, within a very short space of time, the Agora family had expanded to six members.Now, from its European home in Portlaw, Agora’s employees are interacting with people in different countries every day.Many employees are fluent in different languages including Portuguese, Spanish, French, German, and Polish.“The more offices that open, the more services that are required here and the more languages that are required,” explained Jackie.Agora currently employs more than 270 staff members, with the majority from Waterford and the surrounding region.Jackie says the company is impressed by the extensive talent pool which exists locally from sources such as Waterford Institute of Technology (WIT).
“The bigger that pool, the more opportunities for us to tap into it,” she says.The company had searched long and hard to find the right property for its expansion before settling on the historic Woodlock House which was built by the Malcomson family. Initially, Portlaw may not have seemed like an obvious choice for a global publishing company to base itself in.However, all at Agora believe the move has worked out brilliantly as The Tannery Town has become something of a hub in its own right.
Because of its location, Jackie says Portlaw is ideal for attracting employees from a wide hinterland including Waterford City and County as well as South Kilkenny and South Tipperary.
She says company owner and founder Bill Bonner is particularly interested in old buildings and was instantly attracted to Woodlock House. Many of the company’s Baltimore buildings are period buildings which have been refurbishment to their original glory. “Bill has a strong desire to fulfill a building’s function,” explained Jackie. “Here in Ireland, it’s nice to be able to do that.” The interior of Woodlock has been stunningly and carefully refurbished.
Staff can enjoy a stroll through the beautifully manicured grounds and hold a meeting or enjoy lunch outside. With abundant green space, Woodlock is certainly a work environment which many in city centre locations would envy. “It’s a very nice environment to work in,” says Jackie. However, she believes there is still a lack of awareness about the work of Agora and the quality of jobs which the company offers. “People might not realise the quality of employment they can find locally,” she says.
Within the Agora group, there are job opportunities in copywriting, graphic design, managing editor positions, Search Engine Optimisation (SEO), digital marketing, web and software development plus much more. Threefold Systems, for example, are expanding quite rapidly and have very high-spec development and software jobs. Jackie says the move to Portlaw demonstrates a very real commitment to Waterford and the South-East. “People realise we’re not going anywhere. We’re here for the long haul,” she says.
The company marked its 20th anniversary in Waterford with a day of special events last Friday July 19th.
Owner and founder Bill Bonner was in attendance along with politicians including Minister of State John Halligan, IDA representatives Brendan McDonald the South East Regional Manager, and guest speaker Brent Pope.Coinciding with the special occasion, 135 additional jobs were announced for the Waterford hub. “That proves our further commitment to Waterford and the South-East,” says Jackie. “We are very happy here. We have been allowed to grow and prosper and I see a very bright future.”