The price of the average three-bed semi detached house in Waterford city has risen by 2.6 per cent (to €200,000) between March and June of this year, almost double the rate recorded in the county over the same timeframe. That’s one of the more standout findings of the latest national survey conducted by Real Estate Alliance (REA).
Incidentally, city house prices in Waterford have risen by 5.3 per cent over the past year, the survey revealed.
“There is a shortage of supply, and first-time buyers are driving up prices due to the shortage of new builds,” said Des O’Shea of REA O’Shea O’Toole in Waterford.
“Banks are only financing in small blocks of 12 units, when they are sold, they will give finance for another 12.” 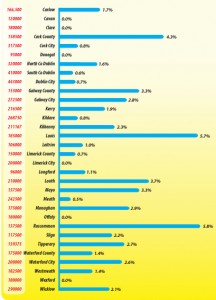 Meanwhile, the price of the average three-bed semi in County Waterford has risen by 1.4 per cent to €175,000 over the past three months, with year on year prices rising by 6.1 per cent.
Said Eamonn Spratt of REA Spratt in Dungarvan: “Good properties are selling quicker than this time last year. There is a significantly stronger demand for family homes in and around large urban centres as opposed to rural locations.”The average semi-detached house nationally currently costs €232,441, according to the Q2 REA Average House Price Survey – an increase of 1.5 per cent on the Q1 2018 figure of €229,111.