Commercial vacancy rates in Waterford city and county fell narrowly during the second quarter (Q2) of 2018 in comparison to the same period for 2017, according to the GeoView Commercial Vacancy Rates Report. And while the recent trend has been slightly sunnier, that rate of progress needs to be ramped up, according to City-based Councillor and Economic & Enterprise Committee Chairperson Eddie Mulligan (FF). Waterford’s commercial vacancy rate during Q2 2018 stood at 11%, down 0.3 per cent on Q2 2017, with the city rate falling from 18% to 17.2%. Dungarvan’s rate fell by 1.6%, Tramore remained stable at 13.2% (the national commercial vacancy rate is 13.1%) while the county vacancy rate stands at 14.3%.
Said Cllr Mulligan: “These confirms that the good work that we are doing is bringing us in the right direction but, to me, we need to accelerate this progress. When you focus in on the regional rankings and particularly Munster, it does get a little worrying when you compare Waterford to our regional counterparts so these figures emphasise to me that more needs to be done to ensure Waterford reduces its vacancy rates.”

The urban realm works in the city centre are now complete, coinciding with the opening of several new businesses in recent months.

He added: “Whilst Cork City continues to perform well with a reduction to 12.4%, Limerick remains higher than Waterford City at 17.4%. This figure takes in commercial premises of all types including service industry, retail, health, construction, industry, education along with financial and public administration. Whilst almost one in four commercial units in the county are retail, the fact that almost half of the commercial premises in County Waterford are service industry related, this is an area that I as Chair of the Economic & Enterprise Committee will ensure we increase our focus on.”
However, the progress made in the city since the establishment of the City Centre Management Group (CCMG) in 2012 has been marked and is worth noting, in Cllr Mulligan’s view.
“At that time, there was huge commercial vacancy in the city with streets such as Michael Street at 50% , which is now at 100% occupancy in terms of ground floor retail/business units. And in reviewing some of our earliest health check reports, we had 123 vacant units in the core city area in January 2014.”
The CCMG Health Check, tracing January to June of this year, offers a stark contrast to a line of commentary, predominantly online, which suggests that the city centre is being commercially hollowed out. “The city’s core vacancy rate for the first half of the year came to 9.75%, which is a huge improvement from figures of 28.7% vacancy in 2012,” said Cllr Mulligan.
“And as late as June 2015, that figure stood at 13.1%, which emphasises the huge positive progression that’s been made over the last few years. In my view, we’re going in the right direction.”
The data presented to the CCMG has, Cllr Mulligan noted, allowed the group to identify which streets had both the highest and lowest vacancy rates.
He told The Munster Express: “As a Council, this analysis has allowed us to respond accordingly with appropriate innovative initiatives, and a recent example of this would be the Cultural Quarter. Whilst we designated the O’Connell Street area as our city’s ‘cultural node’ back in 2013, it’s only over the last 12 months that we’ve seen a concerted effort, working with all interested parties and stakeholders in the area in terms of driving forward the Cultural Quarter strategy. This has led to improved building occupancy in the area and a number of other initiatives including the improved presentation of the street, the staging of various festival and arts events in the area, in addition to significant public realm upgrades. The recent resurfacing of several streets leading onto O’Connell Street (along with footpath improvements) has also fed into the sense of regeneration that’s now ongoing in this part of the city, and traders and residents alike are pleased to see the Council engaged in these essential works.”
The July Health Check also made for welcome reading, according to Cllr Mulligan. “By the end of July, seven city retail units welcomed new occupants including Caffe Nero in Arundel Square and three new food outlets in City Square Shopping Centre. In relation to cleanliness, our City was confirmed as the cleanest City in Ireland whilst the Council’s Environmental & Enforcement Officers remain cognisant of the findings raised in successive Irish Business Against Litter (IBAL) reports.” Eddie Mulligan added: “Waterford Business Group and Waterford Chamber are also collaborating to form a new city-based Tidy Towns Group, which represents another positive step forward for our city centre. In terms of improving presentation, the Council has recently purchased a gum removal machine and after numerous representations on the cleanliness of the new public realm on my own behalf, tendering for a footpath hot wash sweeper/scrubber cleaner. Presentation in the city is a priority as we drive to improve the city centre experience.” 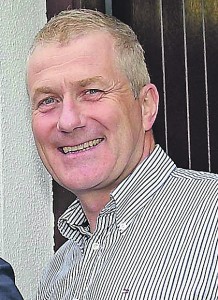 New commercial commitment in the city centre is always welcome, but the stasis in relation to both the three-storey Wetherspoons Bar and T&H Doolans has proven impossible to ignore.
However, between October 2013 and the present time, some 18 planning permissions have been granted via an Economic Support Grant in an attempt to resolve some of the city centre’s longer-term commercial vacancies. Six of these have been applied for this year alone, Cllr Mulligan noted. “We intend to intensify our efforts to reduce vacancy levels over the coming months,” he added.
“One challenge that we clearly have to keep working on, and something which has been raised at Government level is the inadequacy of the Living City initiative. In order to support the development of the above shop living from a residential perspective, this grant needs to be reviewed toward the incentive being an upfront allowance.”
He continued: “One of the issues that comes with being Ireland’s oldest city is that it can be almost as expensive doing up or renovating a property as it is to buy it and with raising finance in the current climate, so that remains a significant challenge.”
Determined efforts to reduce Waterford’s “detrimental vacancy rate” are ongoing, and the improvement of the city centre’s visual aspect will not negatively impact those attempts in the long run.
Said Cllr Mulligan: “The analysis and statistics to date suggest considerable post-2012 achievement but a determined focus must be maintained to attracting occupancy. Ultimately, this job would be made easier by continued increasing footfall reports and a higher disposable income availability in Waterford.
“The work at a strategic higher level to achieve this must continue at pace with support from the IDA. In Waterford city and county, we’re at a pivotal stage in what remains a fragile local economy. As we look towards the future, Waterford businesses more than ever need the citizens of our county to put on the Waterford jersey and shop local. We need to keep as many cents and Euros as we can circulating in the local economy during this period of historic transition.” The wheel is slowly moving in Waterford. Every available shoulder is required to keep it pushing it in the right direction.