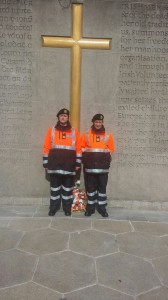 TWO County Waterford Civil Defence members recently received certificates in recognition of their participation in the recent 1916 military commemoration parade in Dublin.
Civil Defence is a volunteer based organisation that supports the front line emergency services and assists local communities.
Volunteers support the emergency services in dealing with issues including severe weather, major accidents, and searching for missing people while also assisting with many community events such as concerts and sports events.
There are 4,500 volunteer members throughout Ireland, including Nicky Butler and Siobhan McCormack who are stalwarts of the organisation.
Nicky and Siobhan are members of Kilmacthomas Civil Defence branch which is under the umbrella of Waterford Civil Defence.
They were the only two Civil Defence members from County Waterford to participate in the special 1916 parade which took place on Easter Sunday.
Reaching the standard required to participate in the parade demanded a lot of dedication on their part.
Civil Defence members from throughout the country were asked to participate in the parade – however many were unable to complete the process due to the level of commitment involved.
Nicky and Siobhan attended all of the required training events in the lead up to the parade and were deemed to have reached the high standard expected of all participants.
“There were three training events from November up to Christmas, one in January, two in February and two in March before the parade,” explained Nicky.
“We had to leave Kilmac every morning at 5.30am to be up in Dublin and we were training until 5pm to 6pm in the evening. It didn’t matter what the weather was like, we were out training,” he said.
Their training was intensive and covered many different aspects.
“We even did extra training that wasn’t actually involved in the parade on the day, but the organisers wanted to be sure that everything was covered,” explained Nicky.
When the big weekend arrived at the end of March, Nicky and Siobhan stayed at the Civil Defence headquarters in the Phoenix Park on the Saturday night before the parade.
They were up bright and early the next morning and joined with the other emergency services in the Phoenix Park at 7am.
The parade began at St Stephen’s Green at 10am and then proceeded through the streets of Dublin city centre.
O’Connell Street formed the focal point for the spectacle, and the Civil Defence members were clearly distinguishable as they made their way up the famous thoroughfare in their bright orange jackets.
“We were very nervous starting off. We didn’t want to make any mistakes,” said Nicky.
Despite the nerves, it was a special moment which they both savoured.
“When we came down Dame Street and then onto O’Connell Bridge we could see thousands of people. We went up O’Connell Street and held our heads up high,” said a proud Nicky.
The participants passed by the viewing stands along O’Connell Street where many dignitaries were in attendance.
After reaching the top of O’Connell Street, the parade continued onto Parnell Square East, Frederick Street North, and Dorset Street before finishing on Bolton Street.
Although it was a tiring day of marching, Nicky says it was well worth all of the hard work and effort.
“Everything was perfect, we were all very proud. We all hugged each other afterwards, even people we didn’t know. There was a huge sense of relief but also pride,” he said.
For Nicky and Siobhan, the momentous occasion was a culmination of many years of dedication to the organisation they love so much.
“Siobhan and I started in the Civil Defence 36 years ago. We’re the best of buddies and we do everything together in the Civil Defence. We’re also involved in the Kilmacthomas CFR group,” said Nicky.
He believes being a member of the Civil Defence offers something for everyone.
“There are different tasks for people of different ages and different fitness levels,” he explained.
“It’s a voluntary organisation and it can be hard to commit to it but you get a lot out of it. The training is there for everyone to avail of and it’s up to yourself to get what you want from it.”
He continued: “I know people in the Civil Defence who are paramedics now and some who went on to become doctors. They used the basic skills which they learnt through the Civil Defence and put those skills towards their education.”
As well as learning such medical skills, Nicky says the Civil Defence teaches important life skills.
He passionately believes that such training should be offered to second level students.
“I think CFR up to basic First Aid should be taught in Transition Year, the same as any other subject that’s on the curriculum,” he said.
“Every day of the week, children are helping to save lives so it’s important that they have these skills and know what to do in an emergency. Any of the Civil Defence instructors would have no hesitation in coming into schools and helping out to teach these skills.”
Nicky says the Civil Defence hopes to embark on a recruitment drive locally this September.
In the meantime, there are many events coming up during the summer which local Civil Defence members will be in attendance at to provide services such as First Aid.
“There are different events coming up every weekend, everything from Point to Point meetings, gymkhanas, the Viking Marathon, DayTripper. Anything we’re asked to go to we try to cover. Recently, we did the Food Festival and the Féile in Dungarvan,” he explained.
Nicky was also part of the local Civil Defence team in attendance at the 1916 commemoration which was held outside the Civic Offices in Dungarvan.
The Civil Defence certainly provides a hugely important role in communities throughout Ireland, and members like Nicky and Siobhan are a great example to all as they go above and beyond in performing their civic duty.
For more information on the Civil Defence, visit www.civildefence.ie.