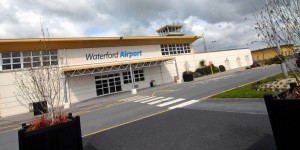 Waterford Airport has a strong case for a PSO (Government supported route) subvention, according to Ireland South MEP Deirdre Clune.

While the Department of Transport has ruled out the provision of a Public Service Obligation (PSO) route between Waterford Airport and the UK, Ireland South MEP Deirdre Clune has called for the creation of a ‘Regional Air Connectivity Fund’.
Ms Clune (FG), who sits on the EU’s Transport Committee, along with respected aviation sources, have told The Munster Express that they believe Waterford has a strong case for PSO inclusion.
But, in a statement to this newspaper, a Department spokesperson said: “The primary focus of such Exchequer supports is to put in place an air service that has not nor is likely to be operated commercially.
“Accordingly, where a commercial service already operates (e.g. Waterford/London-Luton) on a particular route, consideration will not be given to changing it to a PSO supported route, particularly while the commercial service continues to be viable.”
At present, the Department supports two PSO air services routes, connecting Donegal and Kerry to Dublin.
Ms Clune, who has looked into this matter after being contacted by this newspaper, believes that a “peripheral region or ‘thin route’ can qualify for a PSO” if a Member State wishes to impose such an obligation on a particular route.
“Such a route must be considered vital for the economic and social development of the region, criteria which I believe Waterford Airport matches – added to that, the Irish Government must consult and reach agreement with the other Member State serviced by the route – in Waterford’s case, the London government given its connectivity to Luton.”
Ms Clune’s contention was similarly voiced by aviation expert Alan Dwyer, who edits the ‘Flying In Ireland’ magazine.
“Waterford is in a good position to make an application for PSO funding,” he said.
“The Waterford-Luton route and other locations such as Manchester are potentially vital as an economic link for the region and the various State bodies, such as the IDA, Enterprise Ireland and the region’s local authorities should be weighing in behind the Airport on a campaigning matter such as this.”
Failing any PSO support that, Ms Clune said the creation of a Regional Air Connectivity Fund would “offer start-up aid to specified key routes for Ireland’s secondary airports, such as Waterford”.
Citing the establishment of a similar find in the UK in 2013, Deirdre Clune stated that “it is available for brand new routes from regional UK airports that handle fewer than five million passengers a year.
“The fund has worked well in the UK where a total of £56 million is being made available to cover three years of financial support for start-up aid for brand new routes. The fund would be open to both airlines and airports to bid for.”
She added:
“The fund would be specifically targeted at key strategic air routes linking rural Ireland with international hub airports. The idea is to drive connectivity to boost investment and tourism outside of Dublin. The aid would be for routes that are not initially profitable enough to commercially justify the outlay but could in the longer term be developed into viable routes.”
Other Member States support PSO routes to connect across national borders (Paris-Sardinia, Strasbourg-Prague; Brussels-Larnaca [Cyprus])’; in fact, France has 42 PSO routes in total.
Meanwhile, Ms Clune believes Waterford Airport can benefit from a new €1 million marketing fund announced last week by Transport Minister Paschal Donohoe.
“This ring fenced fund is to be used for co-operative marketing of our regional airports…and will be allocated based on those services offering the best inbound tourism potential with the advertising activity likely to take place in the latter part of thus year and the early months of 2016.”
She added: “There are four airports in the Ireland South constituency, including Waterford. Each of them is a vital piece of infrastructure. We need to protect and invest in ensuring they grow passenger numbers in the same way that Dublin has.
“I think this €1 million fund is a good start but something we need to build on in the coming years so that we can develop our regional airports and attract more routes.”
Responding to Deirdre Clune’s proposal, Waterford Airport Chief Executive Desmond O’Flynn stated: “The Airport welcomes constructive engagement about sustainable funding models that recognise the economic and social importance of direct air access to and from regions such as the south east.
“We look forward to hearing more of the detail around the ‘Connectivity Fund’ to be created with the proceeds of the sale of the government’s stake in Aer Lingus and understand it will be managed as part of the Ireland Strategic Investment Fund.
“In the meantime, we welcome the announcement from Minister Donohoe on July 6th regarding the €1m being provided through Tourism Ireland to be used for regional co-operative marketing activities… Waterford Airport envisages joining with key
partners in an application to Tourism Ireland.” (See News 12-15 for our special Waterford Airport feature).