‘Think Global, Act Local’ was the resounding message at the Waterford Chamber Annual Dinner on Friday night last with Tánaiste and Minister for Foreign Affairs Simon Coveney performing keynote speaker duties.
On the topic of ‘Think Global, Act Local’, Minister Coveney stated: “It’s an attitude I like, and one that I think defines the formula that is present whenever we get something just right in Ireland. From our tourist towns to the IDA trying to attract the biggest firms in the world – ‘Think Global, Act Local’ – is present in the successes we see – We have all the ambition of a Global island married with all the security and heart of a local community.” 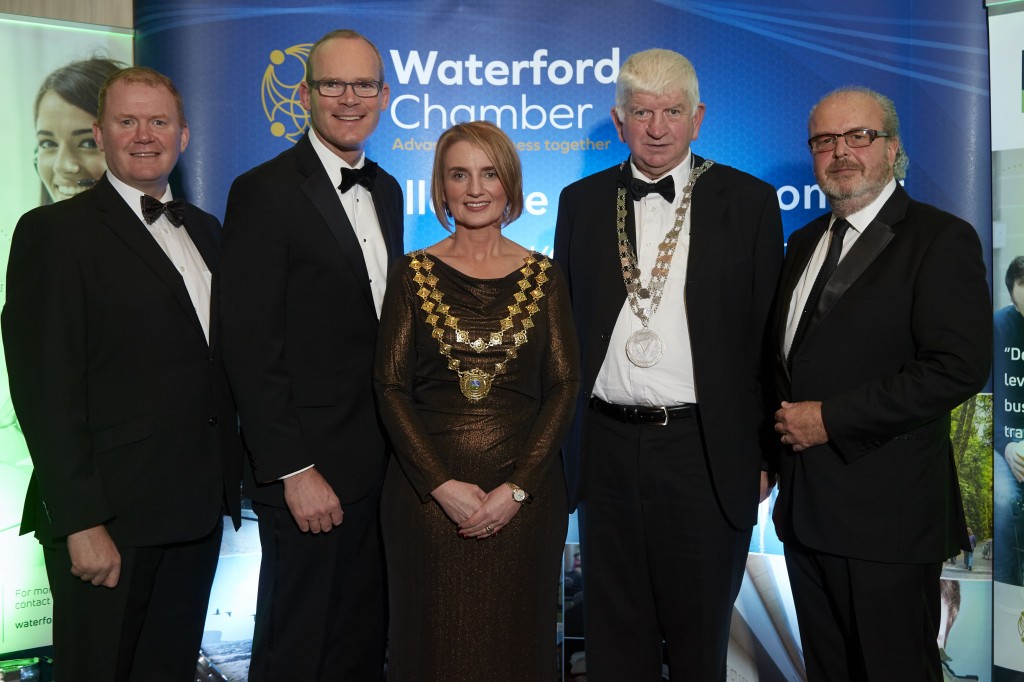 He added: “Project Ireland 2040 recognises that Waterford is the principal urban centre in the South East and is unique in having a network of large and strong regional urban centres in close proximity within each of the surrounding counties. From a national perspective, a stronger Waterford City will lead the development of the wider South East. The population could grow from 50,000 to 80,000 within 20 years.
Said Minister Coveney: “The key challenge for Waterford is to build scale and enhance urban quality through employment led growth.”
Noting that the unemployment rate had fallen in the region from 18 per cent to seven per cent over the past eight years, the Minister said the improved mood in Waterford was palpable, having visited Teva earlier that afternoon. He, like his colleague John Paul Phelan who addressed Waterford Councillors 24 hours previously, said the need for a Technological University of the South East was obvious and logical, noting the good relationship that has developed between Waterford and Carlow ITs.
Regarding Brexit, the Minister said: “it is the biggest danger facing our country and society and it is not of our making”.“EU Chief negotiator Michel Barnier fully understands our unique concerns and supports our key priorities, particularly those around the importance of protecting the Good Friday Agreement. Mr Barnier has our complete confidence in his ongoing negotiations on the EU’s behalf.“The Irish Government has no hidden agenda regarding Northern Ireland. We didn’t ask for Brexit and we didn’t want it, and questions around the border only arise because of Brexit. “We have been very clear on the status of Northern Ireland throughout the Brexit process. The Good Friday Agreement represents the fundamental interests of everyone on this island and the Irish Government is a co-guarantor of that Agreement. We will never do anything that departs from it, and this is why we believe it is so important to avoid the return of a hard border on the island.” 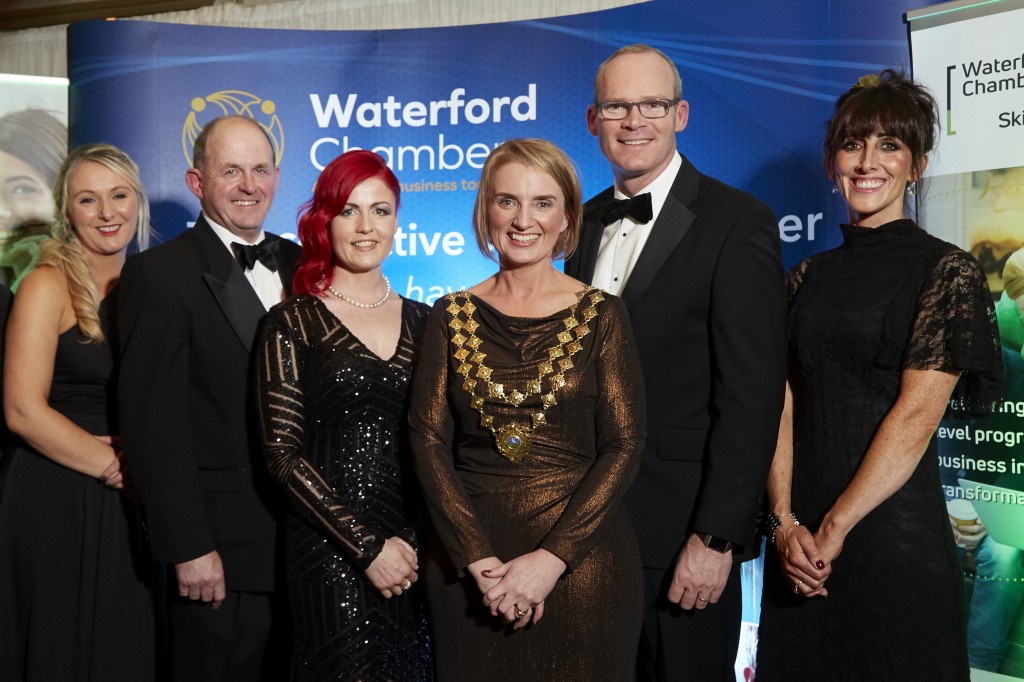 The Tánaiste stressed his belief that the people of Northern Ireland want a Brexit deal. Britain, he said, will remain our neighbours still and noted that there are more Irish born in the UK than in Connacht today.
Peace can be fragile and there may be much to remedy should there be future trade troubles, he said. There could be “a painful journey ahead” and the absence of a Government in Northern Ireland isn’t helping, but he remains hopeful of a Brexit Breakthrough.Later news at weekend suggested this is further away.
Opening the evening, City & County Mayor Declan Doocey said: “I am confident in my capacity as Mayor of Waterford City and County Council that Waterford is now best placed to build on the recent news of investment by companies like West Pharma, Eurofins and Eirgen Pharma and to continue to work to realise the significant opportunity that presents us with the North Quays SDZ. The recent good news was welcomed and appreciated by each and every one of us here tonight.Speaking to over 300 business people in attendance, Waterford Chamber President Kathryn Kiely said: “For our city to best serve our region – to rise to the needs and expectations of a growing population – to compete internationally for talent, trade and investment we, of course, need Government to share our ambitions and to deliver on the commitments and targets set by the National Planning Framework.
“Reflecting on the progress of the past year I am confident that we collectively have the determination to build on this progress and that together with shared ambitions Waterford’s future as a City region is bright.”
IDA Ireland Chairman Frank Ryan told the gathering: “In the years ahead the role each of us will play in the workforce and in the Irish economy will largely be determined by the knowledge we possess and the skills we develop. So education and knowledge will not only directly impact employment prospects but in a collective sense will determine the very future economic performance of Waterford and the South East region.”
There are 37 IDA firms in Waterford employing 7000 people, and 75 in the region with 15,000 employees and since 2015, employment in IDA firms has risen by 30 per cent. Mr Ryan also referenced the soon to be completed second advance factory in Butlerstown, which will soon be marketed.
He also praised the work of Frank O’Regan via the Action Plan For Jobs, along with the efforts of Crystal Valley Tech and City & County Council CEO, Michael Walsh. The new ‘Tech Uni’ will be critical for the region’s future, he feels, and this point was re-iterated by Waterford Chamber Skillnet Network Manager Sara Mullally.“We are in the enviable position to be one of the few Skillnet Networks in the country that is not only Regional but also cross sectoral. Thanks to the increase in the recent Budget, our training fund has grown and we have never been in a better position to support you in business , also in communication, collaboration and further education.”