Construction of the long-awaited playground in Ferrybank is set to begin in mid-Spring, with Kilkenny County Council hopeful that the facility will be open early next summer. Detailing the specifics of the playground at last Wednesday’s Piltown Municipal District meeting in Ferrybank, Council Landscape Architect Claire Goodwin described the pending works as the first phase in the delivery of the area’s 2.5-acre Neighbourhood Park.
Kilkenny County Council acquired the site, which had been due to form part of the Aylesbury housing development in 2016, after the construction company charged with developing the site entered receivership.
Ms Goodwin told Councillors: “It’s still very much a degraded site and given what had been put in place by the developer prior to the Council acquiring it (in terms of foundations and ducting), it would prove cost prohibitive to undo such works.”
However, the landscaping of the site, which will include the building of earth mounds and other soil-related works, will literally ‘bury’ such works in the coming months. Some building material still on site will also soon be removed. Conceding that the site in question is “very wet,” Ms Goodwin said that the drainage works undertaken previously will stand the site in good stead. A budget of €625,000 has been secured for the site, with the local authorities in Kilkenny and Waterford both stumping up €137,000 each, with the remaining monies secured via the Local Infrastructure Housing Activation Fund (LIHAF). 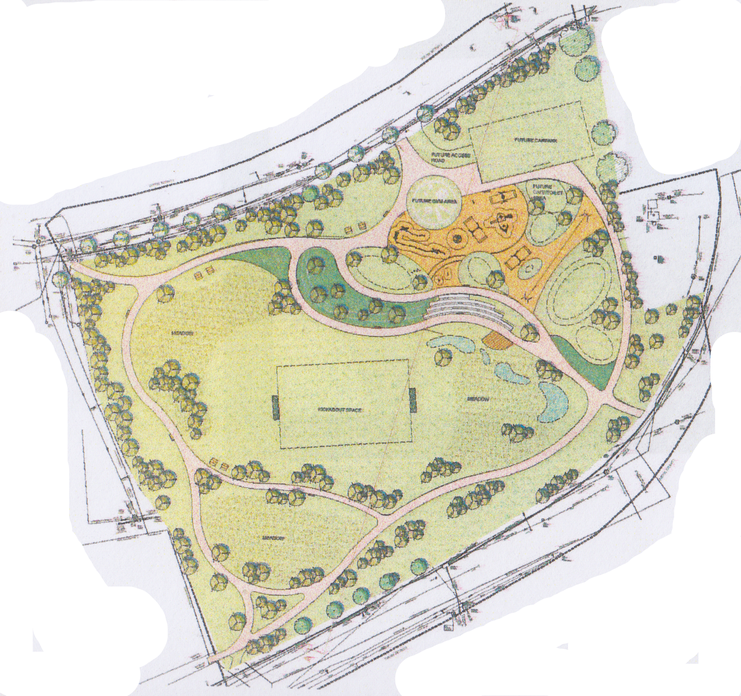 A preliminary layout plan for the Ferrybank Neighbourhood Park, which was presented to Kilkenny County Council by Cunnane Stratton Reynolds (of Cork) last month.

The playground project remains at design stage with the employed Quantity Surveyor, with the price of the playground works to be determined once the plan is taken to tender after Christmas, Ms Goodwin confirmed.
“The main issue, once the tender is secured, will then be the construction and delivery of the playground,” she added. An application for sports capital funding has also been made with a view to installing an Astroturf playing pitch in the park. “We would hope to be on site in the mid-Spring and be open in the summer…we’re confident that this will be a very positive project for the Ferrybank community.”
According to the drawings handed to Councillors at last Wednesday’s meeting, the new playground (which will accommodate persons with special needs and/or mobility issues) is set to include:
* A bird’s nest swing
* An inclusive carousel with bars
* A Robina pirate ship
* Five Rainbow Sambas
* Seven Tubular Bells
* Two springers (one a ‘mule’, the other a ‘donkey’) in addition to a double springer
* An agility trail
* A kids’ table with four sitting poles
* An amphitheatre/hang-out area for teenagers
* A climbing area
* A two-seat swing and
* A cable (zip) line.
The park will also feature wild meadow areas which, as Ms Goodwin stated, be predominantly composed of long grasses given that “you don’t always get the annuals in the first year, such as daisies and poppies, and this may not necessarily be what the average ‘tidy’ person might perceive a meadow area to be”. She told Cllr Melissa O’Neill (Ind) that the meadow will act as a “pollinator haven” and said that the installation of ‘bee hotels’ (similar to what’s in place along the Waterford Greenway) could also be considered.
Welcoming the news, Cllr O’Neill said it was “a dream come true” and a fitting tribute to the Ferrybank Links Lifestyle Group which had first proposed the development of such a park eight years ago. She added: “I believe this park will become a new community hub for an increasingly multicultural area such as Ferrybank and will provide the people of the area with a new and inviting space in which they will get to know their neighbours even better.”
Cllr Eamon Aylward (FF) thanked the County Council officials for the time and energy they’ve invested in the delivery of the project, while District Chairperson, Cllr Ger Frisby (FF) described the playground as “badly needed”. He added: “It’s great to news to see this plan approaching fruition. There has been great engagement with the local community and from here on it, it really is a case of onward and upward. It’ll be great to see a start made in the next few months, which will really get the ball rolling.”