The trend towards online purchases remains a major draw for retail events such as Black Friday and Cyber Monday, but when it comes to Christmas, the more mature customer still likes to physically enter a shop.
This was the finding of a PWC shopping survey disclosed at Mount Juliet recently to an audience mainly drawn from the South East.Half of Black Friday purchasing is now online, for which younger shoppers are mainly responsible for, but older punters still like the traditional shopping method according to the PWC survey.
Older people like in-store shopping at Christmas but the online trend is becoming more prevalent at this time of year., with American shopping habits coming into style both here and in the UK when it comes to retail events such as Black Friday. 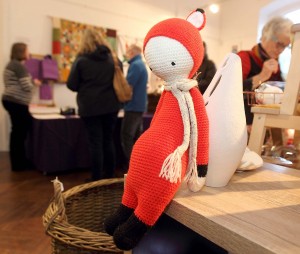 The appeal of local products, such as those available at the Christmas Craft Fair at Garter Lane, was noted in the PWC Christmas Shopping Survey. | Photo: Noel Browne

Younger shoppers increasingly use their phones and laptops while in-store shoppers have identified Black Friday for the purchase of (in this order, as per the survey), electrical goods, clothing, beauty, toys, books/magazines, sports equipment and food/drink. Travel is also increasingly getting a look-in at this time of the year through offers with Aer Lingus and Camino Ways, as well as via local travel agents. As for how much is being spent, older shoppers, with deeper pockets and less weekly outgoings, are spending between €400 and €500, according to the survey, with the younger shoppers surveyed spending an average of €100. It’s interesting that marketing companies appear to target the younger (potential) customer more than their elderly counterpart who in reality has more cash to spend not only at this of year, but all year round.
Time wise, 44 per cent of respondents predominantly outlay most of their Christmas budget in early December, with nine per cent shopping earlier than that. Some 15 per cent of respondents said they planned to do their ‘big shop’ on Black Friday; 14 per cent shopped the week before Christmas while 12 per cent did no shopping at all. The latter figure seems quite high but this may apply to those who have an aversion to consumerism or do not have any spare cash due to low pay, studies or both. Hardly surprisingly, the survey stated that men tend to do their Christmas shopping later than women, with some men and younger respondents admitting to leaving their shopping until Christmas Eve (something we can remember doing on occasion).
In regional Ireland, many shoppers still appear to have a preference for the Main Street over retail parks, but in Dublin the retail parks do very well mainly due to ease of parking and the perceived less stressful environment of such a shopping day. Interestingly, of those that shop online, 70 per cent of money ultimately goes to UK, USA and elsewhere abroad, with just 30 per cent of their cash retained by Irish outlets. It’s also worth noting that duty and VAT is payable for goods priced over €126 euro from outside Europe.
PWC’s Owen McFeely said that their survey had also revealed a rising demand for local products, be it crafts, food or drinks. This trend is important, Owen added, and is good for local producers and for those who champion home products and sustainability. This is good news for Waterford and the South East, and the many craft fairs which are held locally at this time of year. The cost of car parking remains an issue in addition to those shoppers who wish to avoid congestion at this time of year, the survey also noted.