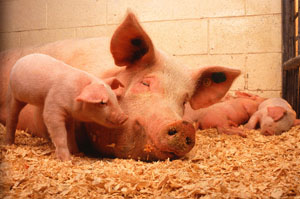 With slaughtering now resumed at Dawn Pork & Bacon in Grannagh and pig meat back on shop shelves, some semblance of normality has resumed following the recent dioxin scare.

Following the agreement reached by the Government and pig processors in the early hours of Thursday morning last, SIPTU’s Ger Malone sounded a cautionary note for the sector’s employees.

“This is obviously a very bad time for any workers to be out of pocket,” said Ms Malone. “So we would be looking at the company to address this particular concern.”

He added that last week’s agreement would be “a relief to concerned pig producers and farm families in Waterford and the south east, as well as the thousands of employees working in the sector, including the committed workforce based at Dawn Meats”.

But the fog that fell on the industry is far from fully lifted, according to the Managing Director of Countrystyle, whose business is also based in Grannagh.

Speaking to The Munster Express, Rory Williams felt that the €180million fund the Government has made available for processors and pig farmers will not cover the financial impact of the total recall of produce.

“I would put the cost closer to €300million,” he said. “The scale of what’s facing the industry is enormous and it’s going to take quite some time to get everything back on track.

“There’s a perception out there that with this Government agreement now in place that things will be back to normal – but that’s not the case, unfortunately.”

In a regular week, Countrystyle has 4,000 square feet of storage space for its produce, which comes with a two-week shelf life.

But with 100 tons of returned produce in various conditions now returned to Grannagh, the company had, at noon on Thursday last, just 300 square metres to work with.

“We’ve had produce left back to us in bin liners, bags, boxes; some of it is still frozen, some of it has thawed out – it might as well be a hundred tons of sand we’re storing,” added Mr Williams.

As producers awaiting instruction from the Department of Agriculture regarding the disposal of recalled pork and bacon, valuable storage space for fresh produce is being denied to companies.

This means that plants such as Countrystyle will be working at a reduced capacity until the powers that be figure out what’s to be done with the recalled meat.

“We’ve been back with a limited run since Tuesday and Wednesday [last week], and it’s great to get the product out there,” said Mr Williams.

Heaping praise on the veterinary officers he’s dealt with in recent days (“I couldn’t but laud them for the job they’ve done”), Rory Williams said that “there should have been better control procedures post-recall”.

He added: “While we’ve got most of our people back in action, we’re only doing about a third of the work we would be normally doing. The storage issue is obviously a very big problem right now, so we’re still waiting for the fat lady to sing.”