New Waterford Chamber President Kathryn Kiely (co-owner and Director of Glazik Ltd) is looking forward to a challenging and exciting year at the helm.
Addressing the Chamber’s 231st Annual General Meeting, which was held at the Granville on May 28th, Ms Kiely has established three priorities for her 12-month term: “Enhancing connectedness, capability building and continuing to influence the planning and development of Waterford as the regional city of the South East.”
The Cork native added: “In Chamber over the last year we have had many discussions with our members on what they see as the key challenges. While challenges in business can be very specific to the day, sector or size of your company, there are a number of common themes which now prevail or are predicted to be challenges in the coming years.
“These include access to a skilled workforce and talent required now and for the workforce of the future; our susceptibility as an open economy having to face factors such as Brexit, impact of changes in US economic policies, EU regulation, introduction of disruptive technologies which fundamentally change established business models and ensuring the competitiveness, attractiveness and vibrancy of Waterford as a location for companies to provide sustainable employment and quality of life.”
Ms Kiely has had a close association with Waterford Chamber over the past six years, serving as a member of the Jobs Enterprise & Innovation Committee, the Executive Committee and has also served as a board member. 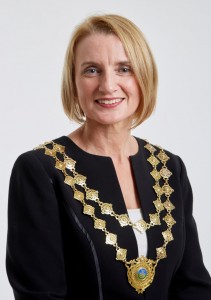 She had previously worked as Head of Industry Services at Waterford Institute of Technology (WIT) where she played a major role in developing a range of research, innovation and enterprise development programmes.In his outgoing presidential address, Paul Nolan reflected on the highlights of the past year, commenting that “the standout for me was to have An Taoiseach Leo Varadkar and the Minister for Finance, Paschal Donohoe, come to Waterford and announce the plan for Ireland 2040 and the role Waterford will play in them as Regional capital. The vision outlined, coupled with the announcement on the same day regarding the Technological Universities Bill, ensures a brighter future for Waterford.” Waterford Chamber, he added, “is locked and loaded to drive the business agenda for our regional capital and play a leading role for the region as it offers an alternative to investment in Dublin, both as a region in its own right and as part of an ‘economic corridor’ with Cork, Limerick and Galway, with a combined workforce in excess of two million.”
Mr Nolan stated: “Whilst is can be said that Waterford has not, despite its own proud history, achieved its potential in recent decades and often felt hard done by, I believe we may also have been too hard on ourselves at times. I believe that Waterford is taking the bit between the teeth and we are experiencing a collective ‘drive on’.”
Chamber Chief Executive Gerald Hurley told members that the Chamber is performing better than it has for many years (containing 416 members with a combined workforce of 15,000 people), a point was re-iterated by outgoing Treasurer Ronan Brazil, who confirmed that membership was growing and that “Chamber is in a very solid position to develop going forward”.
In his annual message, Mr Hurley stated: “Undeniably, there are a number of projects that we need to get ‘over the line’ and we can achieve them – as long as we have a real unity of purpose. Delivery of the infrastructural funding required to enable the development of the North Quays and Michael Street (developments), the creation of Waterford’s Technological University, 24/7 cardiac care and better connectivity (along the N24 – see News 23 for more) are some of (the) things that are long overdue and by working together we can and will achieve them.”