Transport Infrastructure Ireland, Wexford County Council and Kilkenny County Council are delighted to announce that An Taoiseach Leo Varadkar, T.D. will perform the official opening ceremony for the N25 New Ross Bypass on the afternoon of Wednesday the 29th of January 2020.
The 15km scheme represents an investment in the order of €230 million in the South East region, and will generate significant benefits to the region, particularly in terms of shorter and safer journeys for road users and improved accessibility to New Ross and the wider region.
The project incorporates the Rose Fitzgerald Kennedy Bridge over the River Barrow, which at 887m, is Ireland’s longest bridge. The extremely ambitious design of the bridge sets it apart, and it is set to become one of the most iconic structures in the country. 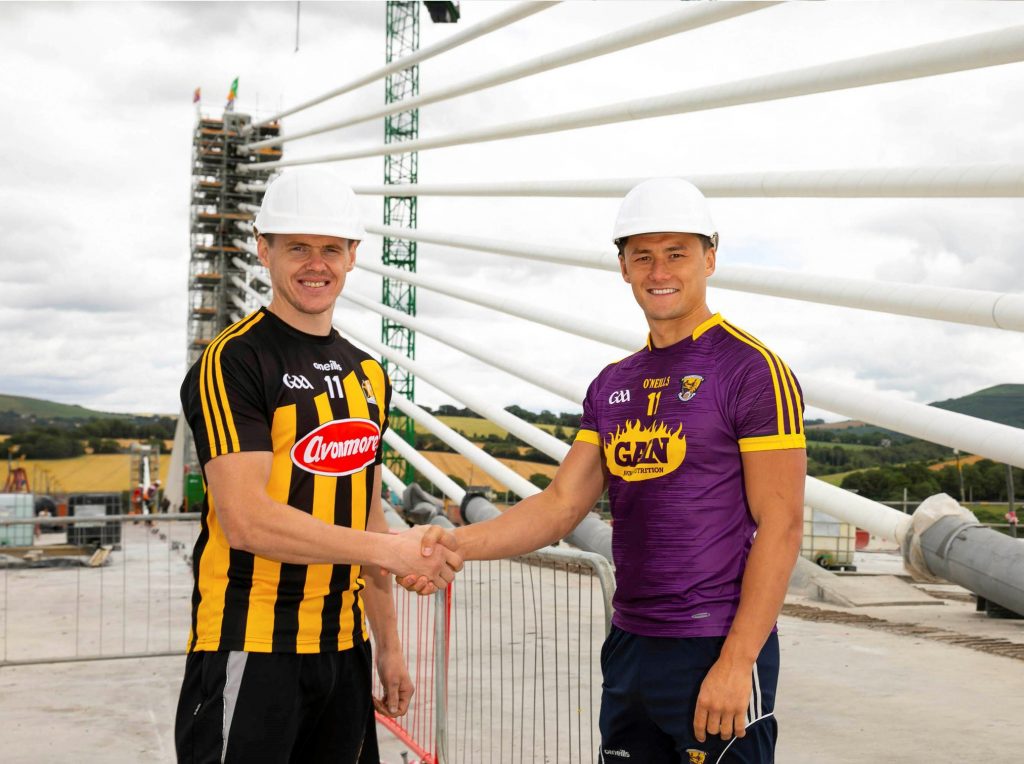 Tj Reid (Kilkenny) and Lee Chin (Wexford) pictured on the bridge last summer. The new bridge connects the counties of Kilkenny and Wexford.

The delivery of the N25 New Ross Bypass is the culmination of over 20 years work by Transport Infrastructure Ireland (formerly National Roads Authority), Wexford County Council and Kilkenny County Council as well as technical advisors for the scheme, Mott MacDonald Ireland.
The project has been delivered as a Public Private Partnership (PPP) Contract between Transport Infrastructure Ireland and the PPP Company, consisting of BAM PPP, PGGM Infrastructure Coöperatie U.A. and Iridium Concesiones de Infraestructuras S.A.
Construction works were undertaken by New Ross Joint Venture, consisting of BAM Civil and Dragados. Arup and Carlos Fernandez Casado acted as designers for New Ross Joint Venture. On average, a workforce of 300 people was employed throughout construction and approximately 2.5 million work hours were completed on site to bring the scheme to fruition.
The opening of the scheme means that chronic traffic congestion and tailbacks in New Ross will be a thing of the past, particularly during peak times, with travel time savings of up to 30 minutes. This will provide significant efficiencies on the strategic N25 route from Cork to Rosslare Europort while also supporting the future growth and sustainability of New Ross Town and the South East region. The scheme also links the N25 route with the N30 New Ross to Enniscorthy route.
The opening of the N25 New Ross Bypass, combined with the recent opening of the M11 Gorey to Enniscorthy motorway in July 2019 represents the completion of another vital link in the overall connectivity and accessibility of Wexford, Kilkenny and the entire South East Region.
Taking into account optimal operational and safety considerations, the road will open to public traffic at noon on Thursday 30th January, 2020.