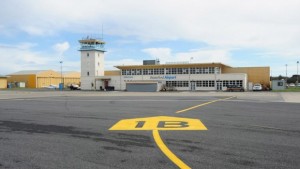 Pickets were lifted at Waterford Regional Airport last Wednesday, after agreement was reached in an ongoing dispute between management and twelve Unite union members.
The ground staff and fire fighters went on strike almost three weeks ago following a cut to their weekly hours from 39 to 21 without agreement. Unite claimed the workers were effectively ‘locked out’ and prevented from working their agreed rosters, while management argued that the cuts were essential because the airport’s revenues had fallen sharply since VLM Airlines discontinued scheduled passenger services on the Waterford-London Luton route in June.
Under the agreement hammered out by management and Unite, five of the workers will receive a voluntary redundancy package while the remaining seven workers will have their hours raised to 33, the same as supervisory grades.
Unite regional officer Tony Kelly said the discrepancy between the hours cuts unilaterally inflicted on the grades represented by Unite and supervisors was one of the issues in dispute. Other outstanding issues are being referred to the Workplace Relations Commission.
“It is thanks to the determined action by our members that management came to the table and a resolution of this dispute was achieved”, he added. “The task now faced by management is to chart a sustainable path forward for Waterford Regional Airport.
“Unite and our members at Waterford Airport would like to thank everyone who supported us during this dispute”, Tony Kelly concluded.