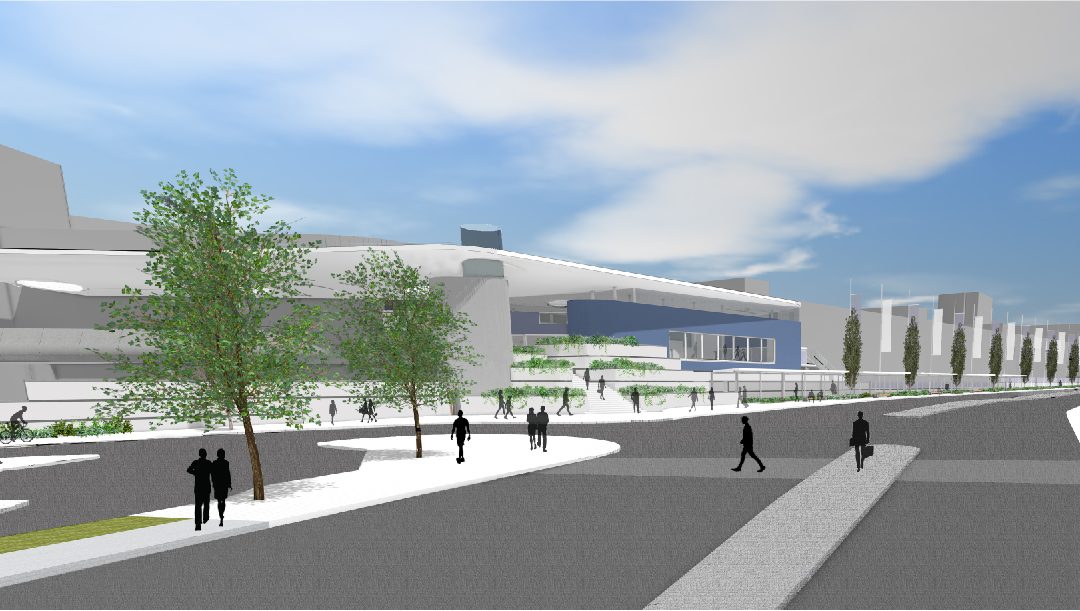 Plans for a state-of-the-art Transport Hub on Waterford’s North Quays are on public display Waterford City and County Council offices and online. The Transport Hub is part of a transformative urban regeneration project, which will see the redevelopment of the eight-hectare North Quays site into a modern mixed-use development with a hotel, offices, apartments and 50,000 square meters of retail, hospitality and entertainment space.
Waterford City and County Council’s Part 8 planning application proposes the construction of a new train station to replace the existing Plunkett Station. The planning in the city’s designated Strategic Development Zone (SDZ) also includes a new bus set down area and short-term parking facilities. This latest milestone for the North Quays development comes at a time of significant investment for the county and region with multi-million euro funding recently announced for Waterford Airport, Waterford Greenway, and the Kilkenny Greenway from Waterford to New Ross.

The Transport Hub is part of the North Quays project.

Councillor John Pratt, Mayor of Waterford City and County Council said: “It’s fantastic to see the innovative North Quays development take a significant step forward with the Part 8 planning application for the Transport Hub. This will be one of Ireland’s most modern transport hubs, linking the city’s rail and bus services and dramatically improving access from north to south. It will be transformative for those living and working in Waterford — connecting with the Greenway, the proposed sustainable transport bridge and an enhanced road network.”
Further developments for the SDZ, which is a project under Project Ireland 2040, will see Falcon Real Estate Development Ireland imminently submit a planning application for the eight-hectare real estate mixed-use scheme on Waterford’s North Quays, and An Bord Pleanála decide on the Planning application for the Sustainable Transport Bridge to the South Quays. In making their decision on the new Sustainable Transport Bridge across the River Suir, An Bord Pleanála has sought further information on a specific issue relating to the visual impact of the vessel protection system on the opening section of the bridge. Waterford City and County Council will be responding in the next two weeks but there will be no impact on project timelines.
Waterford City and County Council Chief Executive, Michael Walsh added: “The ground-breaking Falcon Real Estate Development Ireland scheme, together with the Transport Hub and the Sustainable Transport Bridge, will transform Waterford into a modern city quarter. The North Quays offices and accommodation will provide for a range of enterprises and up to 1,500 jobs primarily targeted at Foreign Direct Investment. In total, 2,300 jobs will be generated by the development and a further 1,000 in strategic industrial lands. These additional jobs alone will generate consumer spend in excess of €50m per annum and lead to an estimated annual footfall of 2,500,000.
“We are a city undergoing huge transition, with 5,000 additional jobs expected by 2025 and Waterford’s tourism numbers to double by 2025 to one million. The North Quays, the development of Mount Congreve as a world class visitor experience and the Government’s recent €2.65 million investment in the Waterford Greenway and €5 million in Waterford Airport, firmly places Waterford as the gateway city of the south east. Waterford is driving forward with the delivery of a forward-looking urban centre that will make it the most cost competitive regional city in Ireland, accelerating regional growth over the long term, and supporting a stronger national economy.”
Waterford City and County Council has submitted a bid for €104.5m to fund the North Quays development via the Urban Regeneration and Development Fund, with matching funding at a local level accounting for a further €34.8m. Part 8 comes following extensive work by Waterford City and County Council with Coras Iompair Éireann, Iarnród Éireann and Bus Éireann.
Further elements in the Part 8 include associated works such as alterations to the existing bus depot site, upgrades to the drainage network and flood defence works. The planning application is available for inspection at the Council’s offices in Waterford City and Dungarvan until 23 August. It is also available to view at www.waterfordcouncil.ie/projects/public-consultations/index.htm.