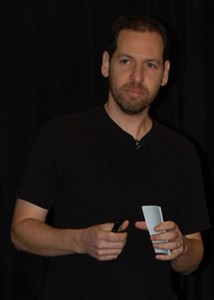 Silicon Valley engineer Eran Hammer has joined Tramore-based software firm NearForm to help build on the company’s continued growth.
NearForm, now the world’s largest node consulting firm, currently employs almost 60 people at its local base and is on track to have 150 staff by the end of 2015 under a rapid extension plan. Among its clients are Qualcomm, Intel, Universal and Condé Nast.
Mr Hammer is the creator and maintainer of the Node.js framework hapi.js, which is used by a number of Fortune 500 companies, including Walmart, Paypal and Yahoo. Node.js is a platform that allows users to build fast, easily scalable applications, and microservices.
“NearForm has been on the cutting edge of large-scale Node.js engineering and the leading force behind the growing popularity of the microservices architecture,” said Mr Hammer.
“I am excited about the many possibilities of combining the two worlds – hapi.js and microservices – into a simple and powerful foundation for the next generation of web and enterprise applications. NearForm opens the door to introduce hapi to a new category of developers by combining the powers of Seneca and the hapi.js framework.”