Eoghan Dalton Reports
The Bus Éireann service for Riverstown in Tramore is to improve thanks to the return of evening services. It will be part of the summer timetable which will also see a move to a permanent operation of double-decker buses by the end of June, according to Cllr Joe Conway (Ind). There will be buses every half-hour to midday, then every twenty minutes until 8pm. The last bus from Waterford is to be at 11.30pm and will return from Tramore around midnight.“All of this will greatly add to the environmentally friendly accessibility to the town and city in the main visitor season,” Cllr Conway said. 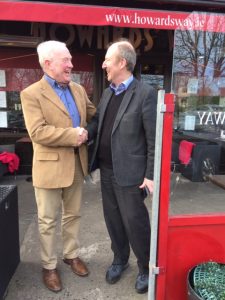 Shaking on it: Tramore Councillor, Joe Conway, exchanges a cordial handshake with Minister Shane Ross after their meeting in Dublin.

The Tramore-based Councillor met recently with the Minister for Transport, Tourism and Sport, Shane Ross, to discuss long-held concerns about transport in the Waterford and Tramore area.
Public transport issues in Tramore, the future of the Waterford – Limerick N24, sports facilities in Tramore and obstacles to tourism growth in the expanding town, were among the topics up for discussion.Cllr Conway said: “Minister Ross was very receptive to my advocacy on behalf of Tramore and Waterford, and facilitated subsequent engagement with Bus Éireann in particular. In follow-up discussions I had with the CE of Bus Éireann, Stephen Kent, significant advances were signalled.
“I also got confirmation that renewed connections to Plunkett Train Station are now under active review.” He continued: “While the overall plan for Tramore’s transport provision is still in development with the NTA, it is likely to be a two-route entity – the 360 and 360A. The former will operate via the Tramore Road, the latter via Waterford Institute of Technology.
“Usage of the two routes will facilitate the serving of increased residential and social needs. The current one-way routing is likely to be phased out and services will operate in and out via the same roads.”
Cllr Conway said that passengers numbers for Bus Éireann in Tramore have increased by roughly 30 per cent since the fares were slashed by a similar percentage, which he said has been “good news for road-users, commuters and our environment”. He added that Mr Kent has said that the Transport for Ireland (TFI) bus stop infrastructure, similar to the city’s, will be provided at all current and new stops, and the designated shelters will be emplaced once all the routings are agreed.Dereliction in the town was also on the menu for discussion with the Minister, particularly in how it affects Tramore’s tourism offering.
“I underscored the Council’s awareness and concerns about this, but that they simply did not have the funds available to exercise their powers. On foot of that, he [Minister Ross] undertook to have his officials look at assembling a plan to fund anti-dereliction measures in coastal towns, with a view to bringing a proposal to Cabinet,” he said. The Independent Alliance Deputy also agreed to follow up on sporting facilities for the town, including an outdoor gym and athletics resources, and to review evidence and reports about N24, particularly deficiencies in the stretch from Waterford City to Piltown.