University Hospital Waterford (UHW) has experienced an Opening Budget increase of €46 million since 2014, an investment which has been aided and abetted by a turnaround in its recruitment levels, according to General Manager Richard Dooley. The budget increase from €129.9m in 2014, to €175.3m as of January 1st last (2015: €146.4m, 2016: €153.6m, 2017: €166.8m) suggests better times lie ahead for UHW.
Speaking exclusively to The Munster Express, citing the hospital’s budget and staffing increases, Mr Dooley said he hoped the age of austerity was now a permanent fixture in hospital management’s rear-view mirror.
“We’ve had a 38 per cent increase in our budget since 2013, and I don’t think there are too many hospitals in the country who have had an increase similar to that over the past five years,” he stated, “and I think that is hugely significant”. 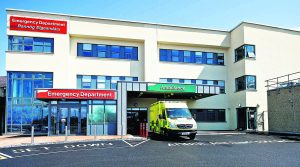 “And if you factor in the €30 million investment in the Palliative Care Unit (which we reported on last week), there has been a significant funding injection here since emerging from austerity, and that’s to be welcomed. It’s indicative of a welcome and positive trend and it’s something we hope will continue when it comes to future budgets.” For example, increased budgets ought to lead to the enhancement of multidisciplinary care for diabetic patients, an issue which has been regularly highlighted by reporter Kieran Foley in these pages.
Richard Dooley admitted: “We have work to do in further developing our endocrinology services.
We have only one Consultant Endocrinologist permanently on the staff. A second post is currently being recruited. We plan to bring on a third post within the next 18 months. We recently had a very good meeting with the National Clinical Lead on Endocrinology Services – and in the short term there is a need for us to address some service deficits that we don’t have. We don’t have enough dietitians in the service and we need to increase the number of Clinical Nurse Specialists in the service and we need to increase the number of podiatrists, and we’re actively pursuing these in the context of this year’s funding – I can’t put my heart on my hand and say how many of those we’re going to have on the ground – but we certainly do have to address the dietetic element of our services.” 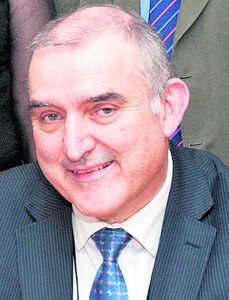 With in-patient numbers decreasing, day cases at UHW have risen from 16,763 in 2007 to 27,550 last year.
“That’s a function of technology; a lot more care can now be provided on a day case basis. Now there was a blip in 2013 when we had to close down and transfer our dermatology service to the South Infirmary in Cork because we had one Consultant Dermatologist who left and another who was on maternity leave. We developed a plan at the time to develop a third position, which we did and we now have three Dermatologists here; this was a problematic area for us but we were delighted to get it back and do so with an additional position in place, which took a lot of work. So taking that into account, in addition to the increase in day cases has reduced pressure in terms of staying as an in-patient, and technology, skillsets and medicines have played a huge role in increasing our day case numbers. And that too can only be welcomed.”
Mr Dooley said that the opening of 19 additional beds at UHW since January 15th had brought total in-patient bed stock at Ardkeen up to 455.
“We have 96-day places and beds on top of that. The 19 beds will be part of a new acute medical unit that will certainly enable us to address the Emergency Department issues and the patient flow issues in a way that makes for a better experience for the patient, and a better experience for staff who work in the hospital. Once we’re out of the flu season, and gladly the numbers are abating, we will be in a position to configure that ward in a way that will deliver those greater benefits to the broader hospital, taking both patients and staff into account.”