What's in a Greenway Name?

Kilkenny and Wexford Councils differ over title of planned route
Kilkenny County Council’s proposed title for the greenway which will link Waterford and New Ross – the self-explanatory Kilkenny Greenway – has been met with some scepticism at the Wexford end of the route.
News of the proposed title for the 22-kilometre amenity was first aired at the March meeting of the Piltown Municipal District, with Director of Services Sean McKeown noting that “99 per cent of it is in Kilkenny”.
He told Councillors that the route’s ‘Waterford to New Ross Greenway’ working title didn’t reflect the reality of its predominant geographic location, adding: “I don’t think we’d get anything stronger as a title than the Kilkenny Greenway.” 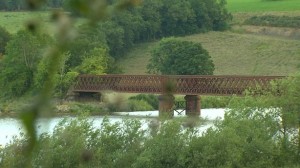 No trains have run on the Waterford-New Ross line since the mid-1990s. | Still: RTE

But this news has been queried by New Ross Municipal District Director Eamonn Hore, who told the New Ross Standard: “I would like to hear it officially from Kilkenny. I would be confident that we will work New Ross into it. The main aim is to get the greenway built. It starts and finishes in New Ross and nobody can dispute that. New Ross is the keynote point. Realistically the greenway will be of far more benefit for the town of New Ross than any other area.”
Speaking to South Kilkenny Councillors at the March meeting, Mr McKeown referred to the potential routing of a 600-metre section at Aylwardstown off the footprint of the original Waterford-Ross railway line.
The proposal had initially been suggested in an attempt to accommodate a local farmer who has working land on either side of this particular section.
However, on recommendation from an engineer engaged by Kilkenny County Council, it was determined that the entire Greenway should remain aligned to the old rail route.
Following a meeting with the aforementioned farm family, in addition to an IFA delegation, Mr McKeown said he was satisfied that the matter would be addressed to the satisfaction of all the concerned parties, adding that they were still “working on a solution”. This assurance was welcomed by Councillors, all of whom are keen to see the project proceed.
Incidentally, the public consultation phase for this Part VIII application came in two parts, one for the majority of the route, the other for the previously referenced 600-metre section, with the Council receiving 84 submissions in total (72 and 12 respectively).
Any concerns which land owners may have in relation to accommodation works will be dealt with in a detailed design plan which will take in the entire 22km route, Mr McKeown added. Councillors feel the development of the new greenway could be among the first such projects to benefit from the Government’s new €56 million Greenway Strategy (2018-2021). The new greenway’s total cost has been estimated at between €7 million and €10 million and Sean McKeown hopes that it will reach contract stage by the first quarter of next year.
The branding and signage of the route would reflect that already in place on existing greenways around the country, such as in Waterford, and it’s also set to be marketed as part of the Ireland’s Ancient East initiative.
As drawings for the Fawaz Alhokair North Quays project have already indicated, it’s widely anticipated that the Kilkenny Greenway will link with the Waterford Greenway via the North Quays, crossing the Suir via the new bridge and running down to the South Quay to Bilberry.