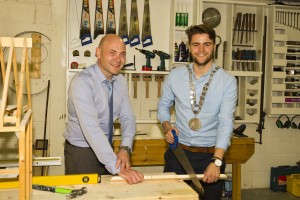 Chairman of the Board of WYTEC Danny Murphy and Mayor Adam Wyse try their hand at some carpentry in the new workshop. | Photos: Mick Wall

WATERFORD Youth Training and Education Centre’s new ‘Pathway to Apprenticeship’ facility has been officially opened.
The new centre, which features an impressive workshop, is located alongside WYTEC’s main building in the Ballinaneesagh Business Centre on the Cork Road.
WYTEC provides training for early school leavers (aged 16 to 21) and young unemployed people.
Mayor of Waterford City & County Cllr Adam Wyse (FF) was in attendance at a special event on Wednesday May 10th to officially open the new workshop and to also present certificates to WYTEC students who have recently completed courses.
He congratulated students and staff on the opening of the new facility.
He highlighted that he started in Waterford Institute of Technology (WIT) doing a Level 6 course before moving up to a Level 8 course.
“For a lot of you, this might not be the end of your education cycle. This could just be a stepping stone to further employment in the future,” he said.
He highlighted ongoing projects in Waterford such as the €300m Saudi investment and the potential for vast job creation.
“Waterford is on the up,” he said.
However, he highlighted that challenges still exist and pointed out the high level of youth unemployment in Waterford.
Richie Grant of Waterford and Wexford Education and Training Board (WWETB) said the new workshop would provide students with an important facility in which they could hone their craft.
“This new area is testament to the commitment of students and staff to adapt to the opportunities that are out there at the moment,” he said.
He noted that the number of apprenticeships is on the rise throughout the country and highlighted the many opportunities to take up positions with employers.
He also noted that WYTEC students were involved in fitting out the new workshop themselves.
He said the new facility would allow students to show potential employers examples of their work and what they are capable of doing.
Chairman of the Board of WYTEC Danny Murphy highlighted the ethos of WYTEC.
“It is the WYTEC mission to help trainees to reach their full potential,” he said.
“Our motto is to create new endings. We have no control over where a person comes from, but we can have a large impact on where he or she ends up. The highly qualified staff at WYTEC believe in giving everyone a chance.”