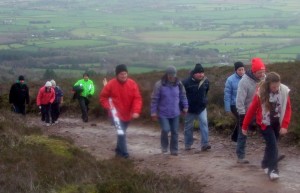 Walkers will take to Slievenamon for a Heritage 'Walk & Talk' on Sunday, September 13th.

Walkers will take to the slopes of Slievenamon on Sunday, September 13th with the Suir Valley Environment Group inviting the public to partake in a heritage ‘walk and talk’, which will be followed by a cup of tea.
The event will convene at Kilcash Hall at 12 noon, with Robert Duggan delivering a talk about ‘unusual local history’ and this shall be followed by two choices for walkers: the trek up Slievenamon or the slightly less challenging stroll to Kilcash Castle.
Refreshments will be served in Kilcash Hall subsequently, with local musicians providing post-trek entertainment.
Further information with respect to the two wind turbine applications currently in play on nearby Curraghdobbin and Carrigadoon Hills, along with the Eirgrid pylon project, will also be made available on the day.
While Knockhouse Ring Fort has been creating a lot of headlines in Waterford city, campaigners against Dunoair’s Carrigadoon Wind Park plan have cited Carrigadoon’s hill fort history.
“It was once the site of a very large hill fort, some which was destroyed by forestry development,” according to an email sent to this newspaper by Ballyneale-based campaigner Declan Blanchfield.
“However, even the uneducated eye can pick out the curved embankment following the contours of the hill. One is immediately struck by the sheer size of the enclosure, all that is left of a hilltop construction, which according to Dr Muiris O’Sullivan (of UCD’s School of Archaeology) probably dates to the Bronze Age/Iron Age period. Dr O’Sullivan is of the opinion that, as is often the case in hilltop sites, excavation may reveal an earlier Stone Age construction.”
The email also refers to the Passage Tomb in nearby Knockroe, north of Ahenny, which is known locally as ‘The Coshel’.
“It has been established as the only passage grave with decorated stones, that has been found south of Blessington, County Wicklow,” the email continues.
“There are two tombs, one facing east which is aligned to the rising sun at the Winter Solstice. The second, and larger tomb, faces west and is aligned to the setting sun at the Winter Solstice. A large quantity of cremated human bones has been found in the tombs.
“Looking west from Knockroe, we see Slievenamon, known to have been a sacred mountain, rich in folklore and tales of Fionn MacCumhaill (buried at the summit, according to legend). At its summit, is a large cairn, which to date remains uninvestigated.”
Reference is also made to the standing stones on Kilmacoliver Hill, across the border in Kilkenny (yet to be excavated) and the suggestion that these sites, including with the hilltop dun on Carrigadoon, may be interconnected.”
“Certainly, their resemblance to the Boyne monuments at Newgrange, Knowth, Dowth and Tara is quite striking.
“These Megalithic sites are known to be older than Stonehenge and the Pyramids of Egypt. If, in time, the connection between these Lingaun Valley sites is proven, it will be a matter of national importance.”
Added to this, during the Bronze Age, a large fort is widely believed to have guarded the roadway running through the Gap of Rathclarish which was used to use to transport copper in Bonmahon through to the midlands.
References to the level of antiquity in the area have featured in several objections made by local residents with respect to both the Dunoair and LANA Wind Developments wind turbine applications.
Meanwhile, Suir Valley Environmental Group will hold a public meeting on Monday next, September 7th at the Faugheen Clubhouse at 7.45pm.
“Many recent developments in our areas will be up for discussion on the night,” said a spokesperson. “Residents are encouraged to attend to be updated and give support to the group.”