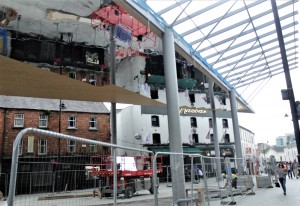 And the ongoing works, pictured on Thursday last.

By Courtney Oliver
Change often comes with mixed feelings, and as the oldest city in Ireland, Waterford is no exception to reaction and counter-reaction when it comes to any significant alteration of the urban landscape.
Take the ongoing revamp of the Apple Market, for example, the most significant ‘facelift’ in Waterford for some time, and several locals who spoke to this newspaper on Thursday last had varied opinions about the project.
The aim of the project is to increase visitors to the area and to enhance this part of the city. However, not everyone, particularly on social media, is ‘on message’ as far as the City & County Council is concerned when it comes to the Apple Marker’s re-invention.
From the cost of the construction project, to its very look, or in terms of the prospect of the many new and exciting events it could catalyse in the area, these works continue to generate contrasting opinions.
Many pub owners located directly opposite the construction site are excited about the plans, and anticipate that it will lend to a better and more exciting future for Waterford.
“We are thrilled with the plans and believe it will draw a lot of footfall to this side of town,” said Kazbar proprietor Sinead McDonagh. “I think the daytime and nighttime economy will be improved by the market.”
Owner of The Hub, Gayle Slattery, is very hopeful when it come to what the finished market will deliver and is looking forward to the events and festivals it will bring to the city.
Deirdre Higgins, owner of Higgins’s Store on John Street has already noted some positive effects of the market.
“I feel it will be worth it in the end. I have already seen tourists taking photographs of the construction, so I think it has already brought in some curious visitors,” she said.
While many business owners are optimistic about the opportunities the revamped market may bring in due course, other business owners have admitted to some concern.
“It looks nice so far, but is it worth all of the money that the taxpayers are going to end up paying for it?” questioned one business owner, who wished to remain anonymous.
“There has been so much money spent on making the town attractive for tourists, whereas the focus should be on what the locals want. At the end of the day, tourists get on a bus and leave, locals are here permanently.”
An employee of a local business, who also preferred to remain anonymous, shared his opinion on the development.
“Millions of euros were supposedly spent on the market when there are homeless people on the streets that could be housed with that kind of money,” he said. “Why wasn’t that a priority over this?”
Bill Carey, who has lived in Waterford his whole life, is embracing what’s in train. “I’m excited to see it finished, I think it will be a great addition to Waterford. It’s nice to see positive changes.”
While many locals have divided opinions on the market, others remain indifferent to the process.
“I know a lot of people think it’s sort of an eye sore, but it doesn’t have much of an effect on me personally. I think it’s fine,” said Waterford native Liam Power.
While views remain divergent, there’s no doubt that the plans will continue a legacy for Waterford’s trading market in the area.
The area under construction has been a location for trade since the early 18th Century, where fresh produce was bought and sold. These new architectural additions have been built in the hope of continuing trade, albeit more representative of 21st Century considerations.