Architect of Constitution honoured in Waterford 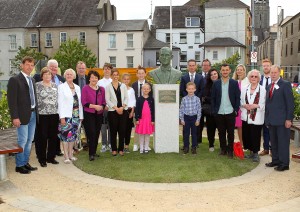 A high profile conference on a new Book on the Irish Constitution and Waterfordian John Hearne took place in Waterford over the weekend.
The launch of the book, the brainchild of former Mercy Convent Principal and historian, Eugene Broderick, attracted some high powered speakers including Senator Ivana Bacik (grand daughter of Waterford Crystal founder Charles Bacik) and Michael McDowell.
Justice Minister Charlie Flanagan was also in attendance, along with Chief Justice Susan Denham, the Chief Justice of Court of Appeal and Gerard Hogan, who has Carrick-on-Suir connections.
Irish Ambassador to the UK, Dan Mulhall chaired the Saturday afternoon session, where John Hearne’s diplomatic career was outlined; he served as a diplomat in Canada during World War II and was Ireland’s first Ambassador to Washington, a move Dan Mulhall will replicate at the end of the summer.
Mr Hearne brought about the Waterford Crystal Bowl of Shamrock presentation at the
White House on Saint Patrick’s day back in the 1950s.
He raised the image of Ireland in American over his 10 year period there during the latter part of the 50s as Ireland began to open to the world and investment began to flow here, following Sean Lemass’s election as Taoiseach.
While in Canada as a diplomat he managed to get the Canadian prime minister to assist Ireland in its neutrality, while still remaining friendly to the Allies during a time of great strain in Europe.
Mr Hearne has also assisted then Taoiseach Eamon De Valera in framing the Irish Constitution between 1935 and 37.
Prior to this, he had been a successful barrister, joined the Free State as a special legal adviser during the Civil War and had to make many tough decisions during that fraught period.
Author Eugene Broderick, who was financially supported by Waterford City & County Council, described lawyer John Hearne as a legal nationalist. having originally been a Redmondite, before going on to work with both WT Cosgrave and De Valera in the new Free State after 1922.
Senator Paudie Coffey opened proceedings on the Friday evening before a paper was delivered by Susan Denham and Senator Michael McDowell. New City & County Mayor Pat Nugent addressed a gathering attended by many legal luminaries.
Mr Hearne brought great distinction to Waterford. He grew up in William Street and his family were in politics, his father having been Mayor in the early 1900s for the Irish Parliamentary Party and he remained a constitutional nationalist throughout his life.
The Hearne family were also associated with the leather business and built up a great boot and shoe manufacturing business and would go well in the First World War.
A relative of his, Maurice Hearne would also serve as a barrister and also wrote a column for the Irish Independent.
A daughter of John Hearne’s married into a Swiss family and many of that branch of the family came to Waterford for the event.
John Bowen, grand nephew and a former student of Waterpark College spoke on Friday last about his proud association to John Hearne and the influence of him and his family.
Mr Hearne died in Dublin in 1969. Following retirement, he also helped to devise the new constitution for the Independent Ghana in Africa. His Swiss grandnephew, Michael Berlinger, also spoke at the unveiling of the bust, which was performed by Minister Flanagan.