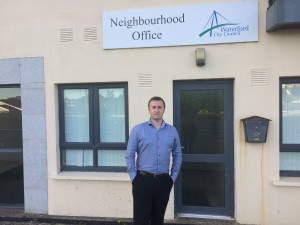 Not pleased: Cllr Eamon Quinlan outside the Carrickpherish Community office.

A LOCAL Councillor has condemned the planned closure of the Carrickpherish Community office by Waterford City & County Council.
The office, which has been in operation for a number of years by the Council, has been a frontline service provider for the Carrickpherish community as well as Gracedieu, Bilberry and neighbouring estates.
Cllr Eamon Quinlan (FF) said the move is part of an “overall trend that has been gaining traction in the last number of years” whereby direct Council services are being rationalised and centralised to a small number of locations such as City Hall and the Civic Offices in Dungarvan.
“Following several inquiries it was confirmed to me that this office is facing closure,” he said.
“The Carrickpherish area has a high number of social and affordable housing. Having a satellite office for Waterford Council in the area was a strong link that allowed locals to get help from the Council when needed and we, the Council, had a strong level of feedback from residents which allowed us to address small issues before they grew and got out of hand. You cannot overstate the value of having a staff member physically available in a community.”
Cllr Quinlan highlighted that, for years, Council community officers were present in communities across the city in offices like that in Carrickpherish.
He described the move as a “backward step” and praised the work of those involved with the office.
“Our community officers have been doing invaluable work, lauded by the Gardaí as a conduit of vital ‘on the ground’ information,” he said.
Cllr Quinlan also highlighted that the Carrickpherish area still remains “quite isolated” with limited public transport available.
He said the area has a number of unfinished estates with have been a “focal point” for attracting anti-social behaviour.
He is calling on the Council to place trained, experienced community officers into the area by using the meeting rooms at the new Carrickpherish Library to host drop in centres for locals so that all residents can have their issues looked at without interrupting current services at the library.
“Without this solution, it is a withdrawal that will surely panic other communities who have such services, which will see this as a dangerous precedent being laid down,” he said.
“I know that Council finances are tight and our obligations are growing but that is no reason to throw in the towel on such services.”