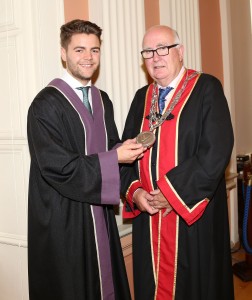 FINE Gael Councillor Pat Nugent has been elected the new Mayor of Waterford City & County Council.
Cllr Nugent, who was first elected to Waterford County Council in 2004, is married to Eileen and has eight children.
A native of Kinsalebeg, he resides in the Brickey Valley outside Dungarvan.
He was proposed by party colleague Cllr Damien Geoghegan and seconded by Cllr Tom Cronin (FF) at last Thursday’s AGM of Waterford City & County Council in City Hall.
Cllr Geoghegan spoke of Cllr Nugent’s strong GAA connections and described him as one of the “most effective and hardworking” Councillors in the Dungarvan-Lismore District.
Cllr Davy Daniels (Ind) had nominated Cllr Mary Roche (Ind), which was seconded by fellow Independent Cllr Cha O’Neill.
Cllr Declan Clune (SF) proposed party colleague Cllr Pat Fitzgerald and this was seconded by fellow Sinn Féin member Cllr Jim Griffin.
However the majority of Councillors, including all Fianna Fáil and Fine Gael members as well as Labour’s Cllr John Pratt, voted in favour of Cllr Nugent.
In his opening speech, Mayor Nugent particularly highlighted the urgent need for 24/7 cardiac care at University Hospital Waterford (UHW) and expressed sympathy to the family of the late Thomas Power.
He outlined his intention to immediately seek a meeting with Health Minister Simon Harris on the issue.
He said he would also highlight to Minister Harris the “critical importance” of restoring Dungarvan Community Hospital to its full quota of patients.
Mayor Nugent said he was looking forward to many upcoming events such as the opening of the new Applemarket development.
He spoke of the success of the Waterford Greenway and paid tribute to CEO of Waterford City & County Council Michael Walsh and his team.
He was congratulated by his fellow Councillors who wished him well in his new role.
Cllr Mary Roche asked that he ensure the issue of 24/7 cardiac care is prioritised.
“There would be nobody happier than myself to sit here next year and give credit to Fine Gael if that is delivered for the people of Waterford,” she said.
Many members of Mayor Nugent’s family were in attendance as well as Fine Gael members and supporters.
He described taking up the position of Mayor as being the “greatest honour” of his political life.
Glowing tributes were paid to outgoing Mayor Cllr Adam Wyse (FF) who was Waterford’s youngest ever Mayor.
Cllr James Tobin (FF) said he was proud to have proposed Cllr Wyse for the position last year.
“We in the Fianna Fáil party are very proud of you,” he said, adding that the 23-year-old had “grown in stature”.
Cllr Damien Geoghegan said he did a fantastic job and represented the Council with “great dignity”.
Cllr Jason Murphy (FF) told Cllr Wyse he had chaired meetings with a “maturity beyond your years” and was “extremely fair”.
Cllr Joe Kelly (Ind) said Cllr Wyse’s tenure as Mayor had sent out a strong signal that there is a place for young people in politics and proved that “age is not a barrier”.
“You absolutely are a role model for younger people who might be considering politics,” he said.
Many references were made to his opening speech last year after his election to the position, which Cllr Cha O’Neill said was “unbelievable for someone so young”.
“You are an inspiration to all young people coming into politics,” said Cllr O’Neill.
Cllr Mary Roche praised his speeches and the manner in which he conducted himself at all events during his tenure.
Meanwhile, CEO Michael Walsh said Cllr Wyse had “reinforced our confidence in youth”.
He highlighted the huge “onus and responsibility” which he took on and his respect for the Mayoralty.
Cllr Wyse said being Mayor had been a “huge honour”.
“One of the best things about being Mayor was being able to meet with so many people and organisations in the community and learn about the issues directly affecting the people of Waterford,” he said.
His mother Michelle and sister Natasha were present and he thanked all of his family and supporters.
He thanked his Deputy Mayor Cllr John Carey (FG), Metropolitan Mayor Cllr John Hearne (SF), Council officials and staff, and paid particular thanks to all of the team in Corporate Affairs especially Lauren Traynor and wished her well in her new job.
Cllr Wyse spoke of the positive developments that had occurred in Waterford during his tenure, with a highlight being the official opening of the Waterford Greenway.
He thanked all who were involved in such projects and praised their hard work.
However, he said there were negative moments as well.
He said he was very disappointed with the boundary review decision which he said had been an opportunity for Waterford to “really develop”.
He also spoke on the cardiac care issue, describing it as “not something we should have to demand, it’s something we deserve”.
Cllr John Cummins (FG) was elected Deputy Mayor on what was his 30th birthday.
His was proposed by party colleague Cllr Lola O’Sullivan and seconded by Cllr James Tobin.
Cllr Mary Roche nominated Cllr Cha O’Neill for the position, with Cllr Davy Daniels seconding this proposal.
The majority of Councillors (which included all Fine Gael and Fianna Fáil Councillors and the sole Labour Councillor) voted for Cllr Cummins.
All Independents voted for Cllr O’Neill, with all Sinn Féin Councillors abstaining from the vote.
In reference to the Fine Gael/Fianna Fáil/Labour voting pact, Cllr Daniels noted that it was nice to see “new politics working so well”.