WATERFORD Councillors have unanimously supported a motion calling on the Government to make it an offence for people to enter seas or rivers during a Status Red weather warning.
The motion also seeks to make it an offence for people to enter seas or rivers when such areas have been closed by either a local Council or Gardaí.
At the December plenary meeting of Waterford City & County Council, the motion was put forward by Cllr Joe Kelly (Ind).
He said the motion sought to recognise “the brave women and men in the emergency services who put their lives at risk to save others, who again were not found wanting during the recent extreme weather conditions, and whose lives were put at unnecessary risk by individuals who entered the sea during the Status Red weather alert”.
He was referring to the controversial activities which some thrill seekers engaged in during Storm Ophelia in October.
Cllr Kelly described such behaviour as “selfish” and “unacceptable”.
“Despite warnings being issued days in advance, they took the view that they would do whatever they wanted to do come hell or high water,” he said. 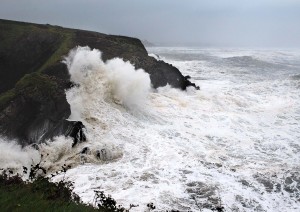 “We as a community and a country should make a stand against people who think their individual rights trump the safety and wellbeing of people who often work in a voluntary capacity in our rescue services.”
Cllr Kelly said he was “disgusted” by the actions of such people which put the lives of others at risk.
He said Waterford City & County Council would send a strong signal by endorsing the motion and suggested that the motion could also be sent to other local authorities.
However, Cllr Sean Reinhardt (Ind) said he felt the motion was “a bit Big Brother-ish”.
“Some people do enjoy extreme sports,” he said,
While he said some activities “scare the bejaysus” out of him, he pointed out that many people engage in extreme sports in a safe manner.
Additionally, he said some people may want to carry out research during such weather conditions.
He called for a small amendment to the motion so that it would preclude those who had previously informed the emergency services of their intent.
However, in response, Cllr Kelly pointed out that if such people encounter difficulties when engaging in such activity, then the emergency services would still feel obliged to respond.
Meanwhile, Cllr Breda Brennan (SF) called for people suffering from mental health issues to be precluded.
“If seeking legislation against people who go into the water during Status Red alerts, it should exclude people with mental health issues who wouldn’t be thinking rationally,” she said.
However, Cllr Damien Geoghegan (FG) said that he believes the Gardaí would “use their discretion” in such a situation.
Cllr John Hearne (SF) said he completely supported the motion.
He spoke of the “sadness” involved when somebody is lost at sea and recalled the tragic death of coastguard volunteer Caitriona Lucas in County Clare last year.
“You have to think of other people, not just yourself,” he said.
Cllr Declan Doocey (FG) said it was “totally wrong and immoral” for “lunatics” to have engaged in such behaviour and suggested that the motion “doesn’t go far enough”.
He also highlighted that people go hillwalking in bad weather conditions.
“And if they break a leg, people have to go out looking for them,” he said.
Cllr Lola O’Sullivan (FG), who is involved in various water sport activities in Tramore, said she fully supported the motion.
She said most people involved in surfing, windsurfing or similar sports would not engage in such activities when the weather is deemed to be dangerous.
“The whole idea is that the sport is enjoyable and not dangerous,” she said.
“People have to take responsibility and not act stupidly during extreme weather”.
Cllr Reinhardt did not proceed with his amendment, and the motion (as proposed by Cllr Kelly) was unanimously passed by Councillors.
Meanwhile, Cllr Geoghegan added that he wanted to praise the recent RTÉ Two documentary ‘After the Headlines’ which saw reporter Charlie Bird visit Dunmore East and reflect on some of the fishing tragedies which have occurred in the area.
He commended Cllr Jim Griffin (SF), who featured in the programme in his role as Area Officer with Dunmore East Coastguard Unit, and all of his colleagues involved in providing the service.