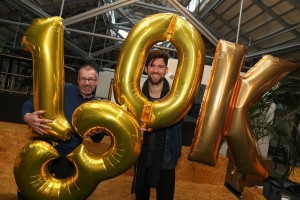 Coca-Cola has awarded €130,000 to community groups in Ireland and Northern Ireland for a series of innovative projects which will support and inspire young people. Tramore Community Radio has received €5,000 from the Coca-Cola Thank You Fund for a young people's media project focused on confidence building and personal development through radio production and presentation. Pictured are Mark Collins, Tramore Community Radio and Eoghan McDermott, Coca-Cola Thank You Fund ambassador

TCR FM’s ‘Good Morning Tramore’ Show is a mid-week programme at 9am which includes a lively mix of chat and music with some gossip and quirky stories from afar.
Frankie O Reilly hosts the show for past year and is a volunteer with TCR FM, he did a course in media studies after spending most of his working career as a master cutter in Waterford Crystal, where he was well liked as an employee and colleague.
As a result Frankie is well informed and has many connections. He also has a lifelong lover of music. He is assisted in the programme by Cork man and Tramore resident Finn O Keeffe, a former manager with the EBS building society, now retired .
Frankie says they mainly chat and check out the news and papers of the day including the Munster Express.
They play some tunes as well and the music is described as eclectic. Another person saw it as coffee morning music. Music varies from Van the Man to Sinatra and musicals. 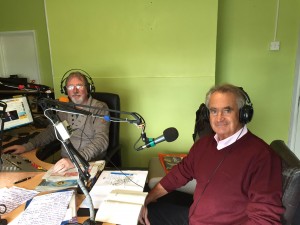 Mark in the station says Frankie is a music enthusiast and has great knowledge of bands from at home and abroad and he also likes to make sure to keep it partly Irish.
As Mark says they like to work not off a play list like normal commercial stations, but they have special tastes. It may not be Lyric fm but it is a different and mixed format.
He says Frankie delivers in a calm moderate approach that is likeable and soothing perhaps.
Putting the world to right is one aspect of the chat as well as the wacky facts found in the world today from the Huff post to UK titles. It airs from Wednesday to Friday for the 100 day licence period of TCR.
TCR recently secured a 5000 grant from the Youth Foundation sponsored by Coca Cola as their part of social inclusion. They are also shortlisted for a community award in Dungarvan. It all adds to positive things happening at TCR FM.
They also had a multi-cultural dining day with cooks from their refugee series doing native dishes. Mark enjoyed the spicy food from faraway places like Afghanistan and Pakistan, and also tasted a South African blaa known as Fat Cookies. Frankie also helps on this programme too with host Mandisa from South Africa, a graduate in media from Carlow IT. Mandisa has the reggae slot on Sundays which is well worth catching for the great tunes.