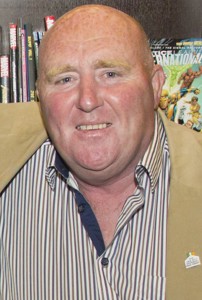 Cllr John Hearne, who has called on Irish Water to develop a code of conduct.

An appeal for Irish Water to establish a code of conduct among its staff would help to defuse tension in neighbourhoods where meter installation is currently taking place, and would curtail potential flashpoints during future installations.
That’s the view of City & County Councillors John Hearne and Jim Griffin (SF) who met with Irish Water officials at the Council’s Menapia Building yesterday Monday, where they urged the company to pursue “the most prudent path forward” in estates and neighbourhoods throughout Waterford.
Speaking to The Munster Express, Cllr Hearne re-iterated his long held view that the stand-offs which had developed between Irish Water staff and residents in Tramore over the past week was “a political as opposed to a policing issue”.
He said: “I’ve said it more than a few times, and I’ll say it again: you cannot force a policing solution onto a political problem, and what’s gone on has placed the Gardaí in, at times, an unfair position. Sinn Féin is not anti-Gardaí: we engage with the Guards day in, day out so anyone suggesting we’re up for a fight with the Guards is talking rubbish.
“I’ll put it like this: if you stick a ‘No Milk’ sign in your window, then the milkman isn’t going to leave a few litres outside your door that morning. If you stuck a ‘No Meter’ sign on your window or front door, I think the message is pretty clear: such a household has no truck with Irish Water and do not wish to engage with them,” he said.
“What I cannot understand, and I know it’s a view shared by my fellow Sinn Féin Councillors and Cllr Blaise Hannigan (Ind) for that matter, and fair play to Blaise, he’s been out with us in Tramore over the past week, is to see people being treated in such a manner by employees of a company who ought to be actively and sensibly engaging with residents.
“After all, Irish Water believes that everyone eligible for this unjust charge is, in effect, a customer of theirs. Well to refuse to pay heed, acknowledge or listen to a customer, to me, seems like a very strange way to do business.”
Cllr Hearne claimed that if certain Irish Water staff continue “to go about their business in such a hostile way, then when they go elsewhere into estates, be it in Tramore, the city or anywhere else for that matter, they’ll be sitting on a tinderbox”.
He added: “I think wherever anyone stands on the matter of the charge, we’re all agreed on one thing: peaceful protest is a right we all have, it’s a fair, legitimate right we all have as citizens of this State. But so many people in all manner of estates, be they working or middle class, are getting rubbed up the wrong way with the way they’ve been treated up to this point.
“So what I would like to see Irish Water doing is to start listening to residents. In other words, if someone from Irish Water went through neighbourhoods with a clipboard and a map if necessary and simply asked the question: do you want a meter installed or not, then in advance of any meter installers coming into a neighbourhood or an estate, that those staff, before they’ve started digging anywhere, know exactly where they’re welcome and where they’re not.
“And if that’s established, then I don’t see how you’d have much in the way of stand-offs or anything like that, and you’d also have an end to the huge waste of Garda resources that we’ve seen right around the country over the last few months.”
Appealing for some “common sense” from the Government and Irish Water, Cllr Hearne, who addressed a meeting in O’Shea’s Hotel on Friday evening, said there was still “a better way out of all this”.
“Scrapping the charge would be the best outcome for everyone, of course, but we know the Government is wedded to it. However, we’re not too far away from an election so we’ll see what the people have to say when it comes to the ballot box a few months from now.
“Irish Water have already agreed to give residents two days’ notice before any of their contractors start work.
“But when someone makes it clear that they don’t want a meter, and God knows, having a ‘No Meter’ sign stuck on your front door or window is about as plain a message as anyone can give, surely the company ought to respect the wishes of those residents?
“And if they were to go door to door in advance of installers going into a neighbourhood, and they established who wanted a meter and who didn’t, wouldn’t that make sense?”