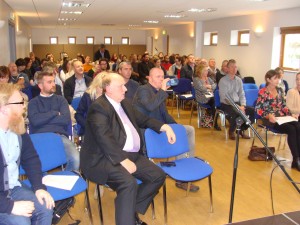 Some of the audience members who attended the drugs information event at Farronshoneen last Thursday.

Seventy per cent of people who have been convicted of drug offences in this country were caught in possession of drugs for their own personal use, Drugs Minister Aodhán Ó Ríordáin told a Waterford audience last week.
Speaking at an awareness event in the city that explored alternatives to the criminalisation of drug use, Minister Ó Ríordáin reiterated his belief that drug users should be treated in a humane manner and should be receiving health interventions instead of criminal convictions.
The event, organised by Waterford Community Based Drugs Initiative (WCBDI) and its volunteers, was attended by a wide variety of local community, statutory and voluntary services, with professionals for and against the decriminalisation model speaking on the day. Amongst them was Anna Quigley from Dublin’s Citywide, which is lobbying for a change in policies.
Ms Quigley explained the decriminalisation model, the primary aim of which is to take an individual caught with a small amount of illegal substances for personal use out of the criminal justice system and instead to make drug misuse a health issue.
Mental health nurse Philip James, who works with young people, outlined health concerns in relation to decriminalisation.
Martin Hayes, Manager with Waterford and South Tipperary Community Youth Services, said the information event was organised in response to a number of upcoming developments on the drugs policy front.
Next year, a special session of the UN General Assembly will be held on the topic of drugs policy and Ireland has been invited to attend, while the current Irish National Drugs Strategy is also due to end in 2016.
It’s hoped that communities will, once again, work alongside the relevant agencies in identifying drug-related issues and recommending responses for the new Strategy that are based in best practice and evidence-based research and last week’s event, held at Farronshoneen Youth and Community Centre, was part of Waterford’s engagement in this process.
“The event was very worthwhile in that it brought together service users, community, statutory and voluntary representatives and gave them a balanced account of the various models”, Mr Hayes continued. “It certainly got people talking.”