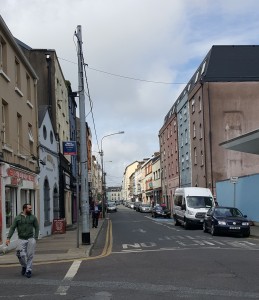 PLANS to develop Waterford’s O’Connell Street into a ‘cultural quarter’ have been presented to local Councillors.
A discussion document was brought before last week’s May Metropolitan District meeting of Waterford City & County Council.
Director of Services Michael Quinn explained that it’s hoped O’Connell Street and the surrounding areas can become Waterford’s ‘cultural quarter’.
The proposed plans involve the input of all relevant stakeholders in the area, including businesses, the multicultural community and the artistic and cultural sector.
“Tributary streets” such as Mary Street are to be included in the plan.
“It’s as much a social inclusion exercise as it is an exercise in developing cultural activities that will take place in the area,” said Mr Quinn.
He said the discussion document would serve as a “starting point for the engagement process”.
“Community engagement in the broader sense of the word will be hugely important for the implementation and overall success of the project,” he said.
However, he acknowledged that funding would be a “major challenge”.
“Funding will be a major challenge as the Council has already committed to a number of major projects and doesn’t have the wherewithal to diverge significant funding. We will need to look at alternative sources of funding,” he said.
He says there are opportunities for availing of funding from the EU and other sources.
The plans include public realm works and utilising buildings which are currently idle.
The overall aim is to make O’Connell Street “an environment where people will want to come and spend time”, according to Mr Quinn.
He said it would take most of this current year to develop the plans and engage with the public, saying that he expects a proposal to come to Council before the end of the year for approval.
There will be wider public engagement and the plans will be put on public display.
“The plan itself will probably be a five year plan,” he said.
After hearing of the plans, different concerns were raised by local Councillors.
While Cllr John Cummins (FG) said the area was “ideal” for the development of a ‘cultural quarter’, he warned against raising expectations given that funding is not guaranteed.
Cllr Eamon Quinlan (FF) noted that there are “in many senses, two O’Connell Streets”
“We already have something of a ‘cultural quarter’ from T&H Doolans to The Granary,” he said,
“From the Granary to the Fitzwilton is in a worse off position.”
He asked if the Council could “animate” this part of the street and emulate what has been achieved at the other end.
Cllr Quinlan said he would love to see the development of “a Temple Bar style area”.
Cllr Cha O’Neill (Ind) noted that “one of biggest problems” is that people staying in the nearby hotels have to walk a long distance to access entertainment.
“The nightlife is too far away from the hotels,” he said.
“There is an opportunity for the likes of O’Connell Street to be vibrant.”
He highlighted the importance of the presence of WIT’s Architecture Department in The Granary building.
Cllr Eddie Mulligan (FF) said he was delighted to see that the Council has a “vision and aspiration” for O’Connell Street.
“If we are all agree to proceed with this, then there is a moral duty on all of us and our parties to ensure we drive this on,” he said.
“We now have a city with a lot of positivity and a lot of momentum – it’s important to keep it going. But we must get funding and establish this city as the regional capital of the South East.”
He described the proposals as “hugely positive” and commended all those involved.
Cllr Breda Brennan (SF) said the proposal for a cultural quarter was “brilliant” but said the issue of parking keeps coming up.
Recent temporary steps to address parking have included the imposition of a limit of one hour’s parking on the street on a trial basis.
“If we’re bringing in so many people, then someone is going to have to drop in a car park somewhere,” she said.
Responding to the queries, Michael Quinn explained that WIT are signed up to use The Granary building for another five years.
He described the fact that the building houses WIT’s Architecture Department as “a real bonus”.
“They have a real interest in what we’re doing and one of their members is on our steering group,” he said.
He accepted that the far end of O’Connell Street would be a “significant challenge” and noted that the area is home to many “backs of buildings” which have their main entrances facing onto The Quay.
He said there is a “greater level of vacancy” on that end of the street, but added that “on one level this could be an opportunity”.
Meanwhile, Cllr Jason Murphy (FF) said he believes O’Connell Street has the potential to be “spectacular”.
He highlighted the recent improvement works which have taken place at the Dominican Church and says the building lends O’Connell Street a “European look”.
“It’s a real asset to have,” he said.
He said the fact that O’Connell Street had no festive lighting at Christmas was “disgraceful” and hopes to see the area receive some more attention this year.
“You can get a lot of bang for your buck with lighting on O’Connell Street because it’s enclosed so lighting would look very well and make a real impact,” he said.
Cllr Murphy says O’Connell Street has real potential to be “Waterford’s Temple Bar without being as tacky”.
“We can learn from the mistakes that were made in Temple Bar,” he said.
He believes the possibility of developing an entertainment district is feasible and says the success of Garter Lane and Tully’s can be built upon.