Gardaí issue warning following spate of similar incidents
LOCAL sports clubs have been advised to closely monitor their facilities following a spate of similar break-ins and thefts.
Extensive damage was caused during a New Year’s break-in at a local soccer club which has been described as “an attack on the community”.
A break-in at Portlaw United FC located at The Paddock, Coolfin, was discovered on Tuesday morning last, January 2nd.
Two large copper cylinders which operate the shower system, and which have an estimated value of €750 each, were both removed during the incident.
Water was turned off to enable the removal of the cylinders and padding from around the water tanks was stripped off and strewn across the floor. 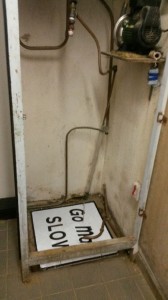 The damage caused resulted in extensive flooding in the dressing rooms.
Club Chairman John Corcoran said the area was “ransacked” and the culprits appear to have damaged “whatever got in their way”.
The entrance gate to the site had been cut open while a lock on a gate at the front of the dressing rooms was also cut.
The entrance door to the dressing rooms was busted open and a number of internal doors were also damaged.
Electricity sockets were also pulled off walls.
The last time the area was used before the break-in was on Saturday evening December 30th.
It’s believed the break-in took place at some stage between this point and when the discovery was made on Tuesday morning.
John Corcoran says the club will now have to install an alarm and CCTV system which will mean extra costs will be incurred. 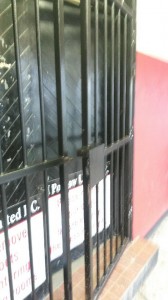 A lock on a gate at the front of the dressing rooms at The Paddock in Portlaw was cut.

He says all in Portlaw are “devastated” and feel the incident is an attack on the community and the hard work of all of the volunteers associated with the club.
Gardaí at Tramore Garda Station said sports clubs in Fenor, Dunhill and Kilrossanty have also experienced similar incidents within recent weeks where copper was deliberately targeted.
Gardaí are investigating and have issued a warning to all local sports clubs and community groups.
A text send to communities as part of the Text Alert initiative requests that offsite pump houses, especially at sports halls and clubhouses, are monitored and inspected following recent incidents.
Gardaí have asked that any suspicious activity at such locations is reported.
Nationally, there were many incidents of copper theft, including copper piping, cylinders, roofing material and phone lines, throughout 2017.